PH, US agree on EDCA implementation in Palawan, 4 other places 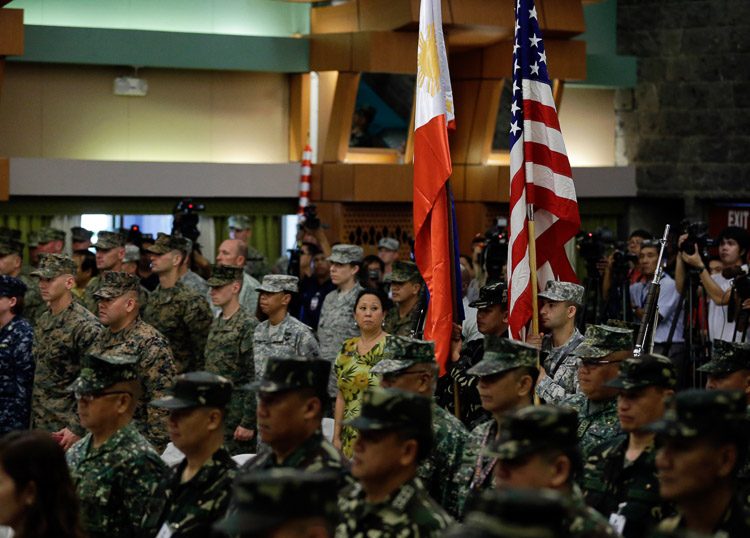 Facebook Twitter Copy URL
Copied
The Antonio Bautista Air Base in Palawan has been the site of maritime exercises with the militaries of the US, Japan, and Australia

MANILA, Philippines – The Philippines and the United States have agreed on 5 local bases where US troops will be allowed to build facilities, a statement released by the Philippine embassy in the US said Saturday, March 19.

The other 4 locations are the following: Basa Air Base in Pampanga, Fort Magsaysay in Nueva Ecija, Lumbia Air Base in Cagayan de Oro, and Mactan-Benito Ebuen Air Base in Cebu.

The Antonio Bautista Air Base has been the site of maritime exercises with the militaries of the US, Japan, and Australia.

Previously, the Philippines said it was set to offer the US military use of 8 bases, after the country’s Supreme Court upheld a security agreement with Washington in January 2016.

The Philippines and the US agreed to cooperate on maritime security at a time when China is seen to be eyeing control of key international trade routes in the disputed waters.

Below is the joint statement of the 6th United States-Philippines Bilateral Strategic Dialogue held on March 17-18 in Washington DC.

Posted by Embassy of the Philippines, Washington DC on Friday, March 18, 2016

The statement also said, “The two sides discussed proposals to support the United States’ efforts to help modernize the Armed Forces of the Philippines, develop capacity and capability for maritime security and domain awareness, and provide rapid humanitarian assistance.”

Both sides likewise expressed their “firm opposition to the ongoing militarization of outposts in the South China Sea and discussed their common view that the installation of new military assets on the outposts escalates tensions.”

They agreed that countries should clarify maritime claims in the South China Sea “in accordance with international law” and peacefully resolve or manage disputes through arbitration. It was an apparent reference to China which has insisted on bilateral talks with the Philippines to settle maritime disputes. The Philippines has brought its case for arbitration to United Nations-backed arbitral tribunal in The Hague, Netherlands.

Both sides reiterated that the ruling in the South China Sea case before the UN Law of the Sea Convention arbitral tribunal “would be legally binding on both China and the Philippines.”

Likewise, the two sides mentioned the need for cooperative activities to “support the rule of law, including law enforcement-related capacity building to assist the Philippines’ efforts to curb corruption, money laundering, trafficking in persons, terrorism, environmental crime, and cybercrime.”

The US and the Philippines also “discussed next steps of implementation” of the Enhanced Defense Cooperation Agreement (EDCA) although details were not provided.

The US defense department is likewise seeking congressional approval to allocate a “significant amount” to maritime security priorities in the Philippines.