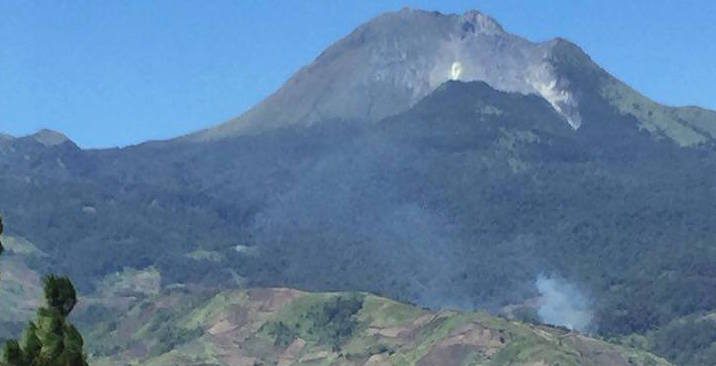 Facebook Twitter Copy URL
Copied
(UPDATED) Accounts say the fire started at 1 pm on Black Saturday along the blueberry area near the Mt Apo summit, the highest peak in the country and a major tourist spot

DAVAO CITY, Philippines (3rd UPDATE) – Firefighters and volunteers have been dispatched to the Mt. Apo summit to respond to reported fires in the area.

Firefighters dug ditches that were 2 meters (7 feet) deep in their battle to contain the blaze, which began Saturday afternoon and was ongoing 24 hours later, to stop it from spreading on the tourist hotspot.

Businessman Philip Dizon told Rappler his friend communicated to him late Saturday night, March 26, that the fire started at around 1 pm on Black Saturday along the blueberry area near the Mt Apo summit.

Dizon quoted his friend Lito Esperal as saying, “We are now helping the mountaineers to evacuate to safer ground because the fire is moving towards the side of Lake Venado.” Esperal was on Mt Apo on Saturday.

“The fire is not within the Kidapawan side, but in the areas of Kapatagan, Digos City, Sta Cruz, Davao del Sur, Makilala, North Cotabato and Davao City, but from our end we already sent our 911 personnel and fire marshalls. My tourism officer is already there,” Evangelista said.

Considered the highest peak in the country with an elevation of 2,954 meters, Mt Apo is one of the Philippines’ favorite tourist destinations. It is located 40 kilometers from Davao City and 20 kilometers from Kidapawan City.

Former Agham Representative Angelo Palmones, who is from Kidapawan City, also confirmed he received reports that “campers are already evacuated to Godigodi camp and Lake Venado.”

There were no reported injuries and nearly all of the 1,000 tourists who were on the mountain were evacuated by noon Sunday, Davao provincial disaster official Harry Camoro told Agence France-Presse.

Dizon said, “It is always like this every year, especially when there is drought, we do not have forest guards, I remember we have them, but I guess they are old now, and we do not have fire fighters there.”

The cause of the fire was still undetermined as of this writing.

The implementation of the Comprehensive Management Plan for Mt Apo as mandated by the Writ of Kalikasan in 2014 is a “must” now, said Palmones.

Early March this year, Dizon lamented the failure of the Department of Environment and Natural Resources to act on the continued burning of bushes in the villages located at the boundaries of Davao City and Davao del Sur.

The forest fires affected about 100 hectares in the highland prior to Saturday’s afternoon fire.

In January this year, the Kidapawan City tourism council set guidelines for a controlled climb for Mt Apo to protect the mountain, but mountaineering groups sought for considerations since many climbers have booked ahead of time.

Evangelista told Rappler: “The consideration was made but from our side here we are very strict and impose rules for climbers that only tour guides are allowed to cook in the area, but we have many trails so I don’t know what is happening in the other side.”

Drought, according to Evangelista, is contributing to the fire.

Air force helicopters were deployed on Sunday to survey the damage. – Editha Z. Caduaya, with reports from Agence France-Presse/Rappler.com