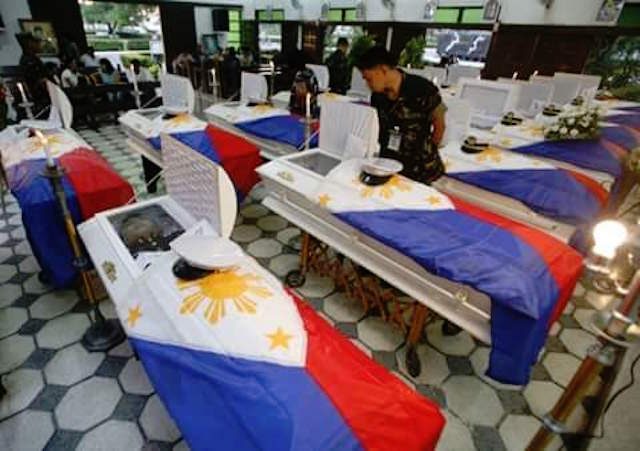 ZAMBOANGA CITY, Philippines (5th UPDATE) – At least 18 soldiers and 5 terrorists were killed Saturday, April 9, in an encounter between the military and Abu Sayyaf militants, the Armed Forces of the Philippines (AFP) said Sunday, April 10.

The government forces recorded at least 53 wounded soldiers during the 10-hour encounter in the town of Tipo-Tipo, Basilan, while the rebels also suffered at least 20 injuries, including Abu Sayyaf leader Radzmil Janatul, aka Kubayb, the military said.

“This is part of the military operations against the Abu Sayyaf,” launched after a series of abductions of foreigners, he told reporters.

Another military spokesman said the soldiers were on their way to attack an Abu Sayyaf hideout when they were ambushed.

“Our group was heading to attack them. On the way, they were ambushed,” Colonel Benedict Manquiquis, spokesman for the unit involved in the battle, told radio station dzRH.

“The enemy had the high ground so no matter where our soldiers fled to seek cover, they could still be hit by the heavy firepower and improvised explosive devices of the members of the Abu Sayyaf group,” he said.

The military released the names of the soldiers killed in the encounter.

Among the terrorists’ casualties was a Moroccan national, identified as Mohammad Khattab, as well as Ubalda Hapilon, the son of Isnilon Hapilon. The casualty count is still expected to go up, once reports from the ground come in, the military added.

Khattabi was identified by the military as an instructor in making improvised explosive devices as well as an “Islamic jihadist preacher”.

“He wanted to unify, organize all kidnap-for-ransom groups to be affiliated with an international terrorist organisation,” the AFP Chief of Staff General Hernando Iriberri told reporters in Zamboanga City.

He would not identify the international group the Moroccan was allegedly working for.

Iriberri said operations were continuing, adding that “even as we speak, there is an encounter going on in the same place.”

Military spokesman Colonel Noel Detoyato told GMA News in Manila that “our standing order… is no let-up in our combat operations so we expect in the next few days, there will be many more encounters”.

A live screening of Filipino boxing legend Manny Pacquiao’s last fight taking place in the United States, which was scheduled to show at a military gym in Zamboanga, was called off as the facility prepared to receive the bodies of the slain soldiers.

It came just a day after former missionary Rolando del Torchio – held hostage for 6 months by suspected Islamic militants – was found aboard a ferry docked on Jolo.

The Abu Sayyaf is a small group of Islamic militants infamous for kidnapping foreigners and demanding huge ransoms, as well as for being behind deadly bombings in the country where 80% of the population are Catholics.

Eighteen other foreign hostages are being held in the Philippines, most or all of them thought to be by the Abu Sayyaf.

Tan said the Basilan-based Abu Sayyaf are led by Isnilon Hapilon, one of its most senior figures who has pledged allegiance to the Islamic State fighters in Syria and Iraq, and who is also wanted by the US government for the kidnapping and murder of Americans.

The Abu Sayyaf was established in the early 1990s with seed money from Osama bin Laden’s Al Qaeda network.

It was a radical offshoot of a Muslim separatist insurgency in the southern Philippines that has claimed more than 100,000 lives since the 1970s.

In a statement Tan added that the military “continues its intensified focused military operations in tracking down the ASG (Abu Sayyaf Group) responsible for the series of kidnappings and atrocities in the area.”

The Saturday incident is the latest in a string of deadly encounters involving the military in the region.