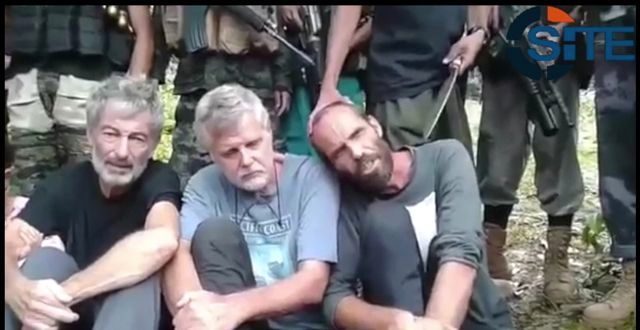 MANILA, Philippines – Soldiers and policemen intensified efforts on Monday, April 25, to rescue 4 hostages kidnapped in Samal Island last year, amid threats of the Abu Sayyaf Group that it will behead one of its hostages if its demands are not met.

About 400 Abu Sayyaf members are reportedly involved in the kidnapping of the 4 individuals – 3 foreigners and one Filipina – from a resort in Samal Island, Davao del Norte, in September 2015.

In a video released last March, the Abu Sayyaf demanded P1 billion for each of the 3 foreigners: Canadian tourists John Ridsdel and Robert Hall, and Norwegian national Kjartan Sekkingstad.

The group threatened to kill the hostages if its demands are not met.

Malacañang said “maximum efforts” are being exerted by law enforcement authorities to rescue the hostages after the Abu Sayyaf announced the possible beheading of one of the hostages, following intensified operations against the terrorist group in Basilan and Sulu in recent weeks.

Intelligence sources earlier told Rappler that the ASG had threatened to kill the 2 Canadian hostages last week. The kidnappers later agreed to “extend” their deadline to this week.

At least 18 foreign hostages are held in the Philippines, most or all of them thought to be with the Abu Sayyaf. – Rappler.com