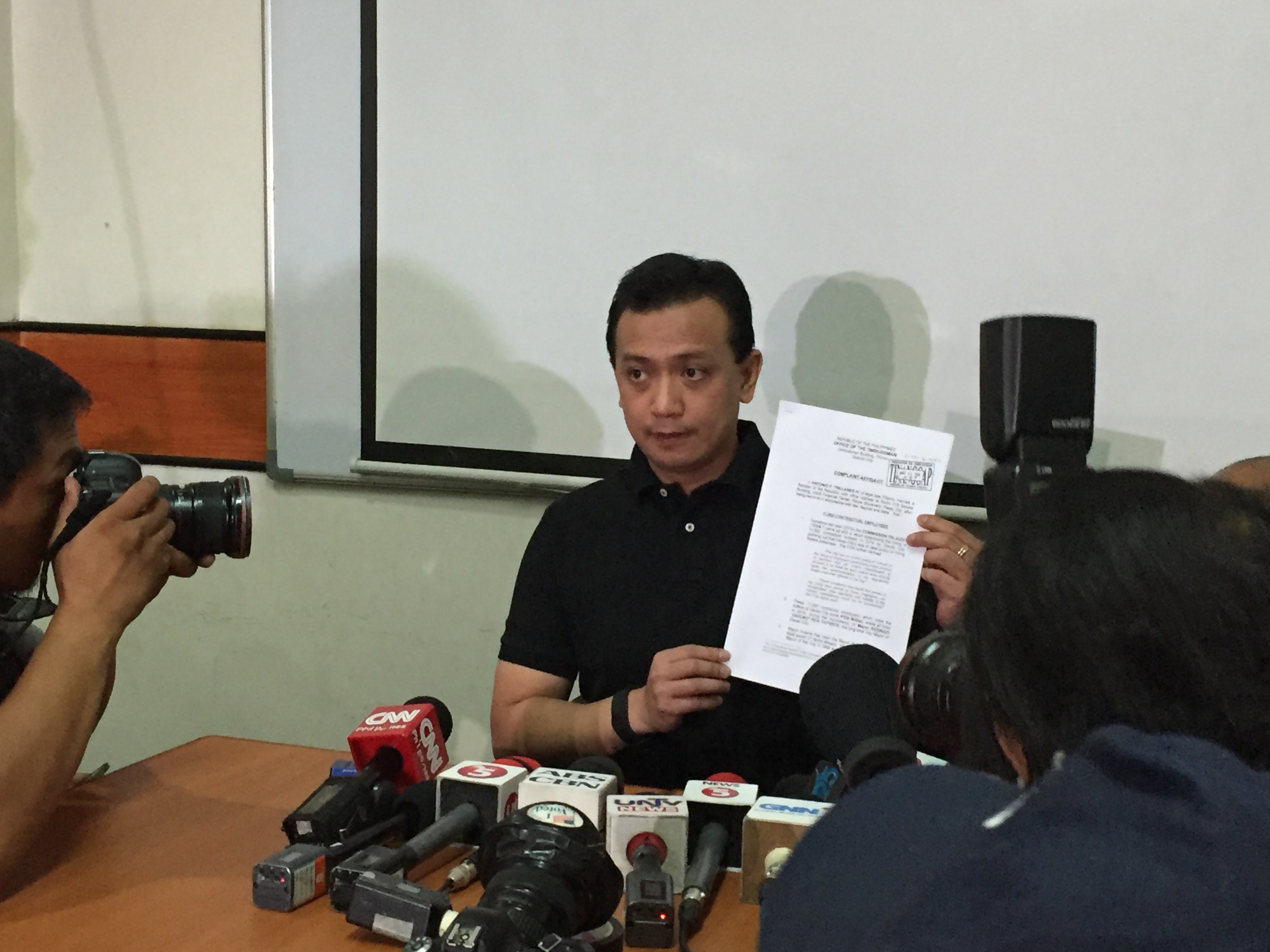 MANILA, Philippines (UPDATED) – Senator Antonio Trillanes IV filed a plunder complaint against Davao City Mayor Rodrigo Duterte before the Office of the Ombudsman on Thursday, May 5.

Trillanes said that the possible source of the alleged P2.4 billion worth of deposits to Duterte’s account is a scheme involving supposed ghost employees of the Davao City government. (READ: Trillanes to Duterte: Stop doing a Binay, sign a waiver)

Trillanes, a vice presidential candidate in the 2016 elections, said that a 2015 Commission on Audit (COA) report showed there were more than 11,000 contractual workers in 2014.

The Davao City government spent P708 million on the salaries of these workers, but the COA noted that there were no documents to prove that they were actually rendering work.

(The COA said these workers had no job descriptions specified in their contracts, just names.)

Trillanes said his camp did an independent check of the names in the list of contractual employees. He did not disclose, however, how many of the names they actually validated.

“Nag-random sampling kami. It was enough to ascertain na ghost employees,” he said.

(We conducted random sampling. It was enough to ascertain that the Davao City government had ghost employees).

Aside from plunder, Trillanes also filed a complaint for alleged malversation of public funds and violation of the Anti-Graft and Corrupt Practices Act.

“Roxas awarded City Government Seal of Good Governance in 2015. This means the LGU went into evaluation. That’s a positive affirmation compared with trumped up charges,” Laviña said in a statement.

Last Monday, May 2, Trillanes had hinted that the alleged P2.4 billion could be from illegal drug operations.

But the senator said in Thursday’s news conference that they are still investigating this angle.

(We have not confirmed his involvement in protecting drug lords, but the information we have point to that.)

The senator also previously accused Duterte of not declaring P211 million in his Statement of Assets, Liabilities, and Net Worth (SALN).

On Wednesday, May 4, the presidential bet presented documents on his Bank of the Philippine Islands (BPI) account at the Julia Vargas branch, which showed he had P17,816.98 on March 31, 2014. Duterte, however, did not reveal his account’s transaction history, which Trillanes is demanding to see.

Duterte also warned the Anti-Money Laundering Council (AMLC) and Bangko Sentral ng Pilipinas (BSP) that he would charge them with “criminal negligence” for not raising the alarm if indeed such large deposits were made to his account in the past years.

Under the law, a deposit involving more than P4 million should have been reported to AMLC within 5 to 10 working days after the transaction was made.

But the law also states that AMLC and the involved bank are prohibited from communicating to any person that a report was made. – Rappler.com