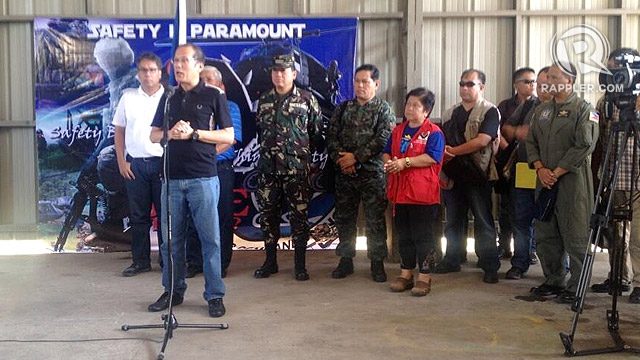 Facebook Twitter Copy URL
Copied
Aquino cites his response to Super Typhoon Yolanda and the Zamboanga siege, says solving the problem quickly would better ease the suffering of the victims

MANILA, Philippines – President Benigno Aquino III defended himself against criticism that his administration lacked empathy toward the ordinary Filipinos, especially during crisis situations that rocked his 6-year term.

In a media interview in Tarlac on Thursday, May 26, Aquino was asked to respond to criticism that he was unable to share the feelings of Filipinos – one of the common attacks hurled against the President by his detractors, who dubbed his government as insensitive and a failure.

He was also asked whether this perception would have changed if Aquino, a bachelor, had a First Lady.

Aquino responded by citing his reaction during two crisis situations in 2013: the onslaught of Super Typhoon Yolanda (Haiyan) and the Zamboanga siege.

The President said that throwing a fit of anger or crying in public would not have helped ease the suffering of the many victims of the two incidents.

(How should I have reacted? Tear my remaing hair out and say, “What should we do?” Would that have helped? When they presented the problem, should I have just cried over it? Should I have thrown a fit?)

Aquino added that being a president means taking on the responsibility of looking after the interests of the public.

(There’s a crisis, so I should address that crisis, lessen the suffering of my fellowmen as soon as possible, in all circumstances and with what I can give.)

To emphasize his point, the President recounted how he responded to the double tragedies that hit the country 3 years ago.

In the days after Yolanda ravaged Tacloban in November 2013, the President recalled seeing dozens of people wandering aimlessly on the road, waiting for aid supplies to be delivered. But after seeing that no one was trying to calm the people down, Aquino said he decided to take charge.

(I told them: “What are we doing here outside? Perhaps we should go home, go back to our barangays, because help from the national government will be coursed through the barangays, the first responder.” Did I fall short on understanding their condition, their worries?)

During the Zamboanga siege in September 2013, Aquino said emotions were running high after the Nur Misuari-led faction of the Moro National Liberation Front attempted to seize control of the city, leading to a month-long standoff that left more than 200 dead.

In talks with representatives of the Zamboanga City community, Aquino recalled how they told him that the interests of the more than 200,000 city residents should be prioritized over that of the 200 hostages. The President recalled being told that the siege should end immediately.

Aquino said he took this to mean an all-out attack against the rebels, which would also affect the safety of the hostages.

To try to calm them down, Aquino ran through scenarios: order the Air Force to drop bombs, or use cannons to kill all the rebels. But, he said, those who asked for such an attack should accompany the President when it the time came to visit the relatives of those killed.

He also asked them to consider the consequences, such as the possibility an ongoing clan feud, known as rido.

(“Now, we’ve bombed them, so the bodies would be torn to pieces. We can’t place the remains properly in the caskets. We would have to present these dismembered remains to the relatives. Join me in visiting the wake.” And after that I told them: “You know the situation here, when the family of the dead feel they were done injustice, there’d be rido. So after this, we’ll have ongoing clan war. Is that what you want?” They stopped.)

The President said that instead of demonstrating how angry he was – an act, he said, which would not be in the interest of the public – he decided to take active charge to calm the people down and look for rational solutions.

If he had a wife, he added, he said his role would still be the problem-solver.

(If I had a wife, I would come up with the solution, be formal, in control; to my wife, I’d say, “Darling, can you be the one to cry?” It’s perhaps not showbiz.)