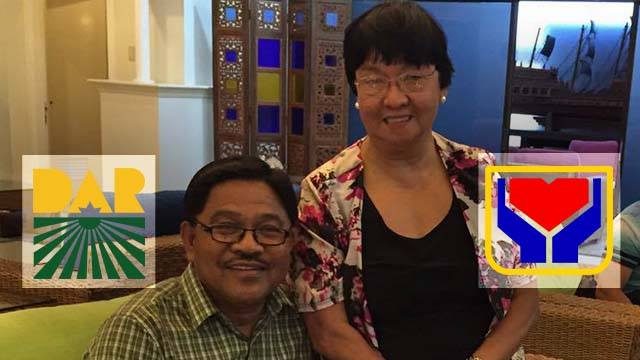 MANILA, Philippines (UPDATED) – Two of the 10 Cabinet nominees of the National Democratic Front (NDF) to the incoming administration joined the meeting called by President-elect Rodrigo Duterte with his prospective appointees on Tuesday afternoon, May 31.

University of the Philippines professor Judy Taguiwalo and former Anakpawis party list representative Rafael Mariano, the NDF’s nominees for the Department of Social Welfare and Development (DSWD) and Department of Agrarian Reform (DAR), respectively, arrived in Davao City for the meeting a day after they were invited to attend it.

In a Facebook post on Tuesday afternoon, Alliance of Concerned Teachers (ACT) party list Representative Antonio Tinio captioned a photo of Taguiwalo and Mariano, “Ka Paeng and Judy in Davao waiting for the start of the meeting with President-elect Duterte.”


ATM: Ka Paeng and Judy in Davao waiting for the start of the  meeting with President-elect Duterte.

On Monday, May 30, Taguiwalo and Mariano were invited to fly to Davao City for a Tuesday meeting with Duterte set at 2 pm.

An activist since Martial Law, the 65-year-old Taguiwalo obtained her doctorate degree in Philippine Studies at UP Diliman and her Master’s degree in public administration at Carleton University in Canada.

She retired from UP on July 31, 2015, but the university extended her appointment as professor and as director of the UP Center for Women’s Studies until July 31, 2016.

Mariano grew up in a family of farmers in Nueva Ecija until they were displaced from the land they tilled at the height of Martial Law. This prompted him to join the protest movement against the dictatorship.

A respected leader in the progressive movement, Mariano was elected to represent Anakpawis party-list in the 13th Congress. The farmer-activist-turned-legislator authored House Bill No. 2532 or the Farmers Land Rights Act; HB 2591 or the Farmers Security of Tenure Act; and House Resolution 155 that sought to junk the stock distribution option given to Hacienda Luisita beneficiaries.

On March 25, Duterte said the NDF had submitted a “very impressive” list of names to him, noting that 4 of the 10 nominees are women.

Duterte initially opened 4 departments to Left nominees: the DSWD, DAR, Department of Environment and Natural Resources, and Department of Labor and Employment.

He has already named former justice secretary Silvestre “Bebot” Bello III as the next DOLE chief, which the NDF said was acceptable as Bello is also in its shortlist to Duterte.

Duterte, however, has reconsidered the appointment of a Leftist nominee as his DENR secretary, citing sensitive concerns about the mining industry. – Rappler.com