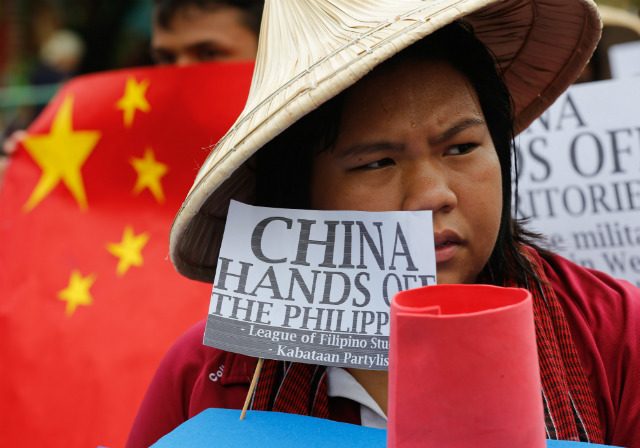 Facebook Twitter Copy URL
Copied
China should understand 'that not acknowledging the rule of law is against its own national security and national economic interests,' an analyst says

MANILA, Philippines – The Philippines should build “international consensus” to pressure China to abide by a possible ruling in favor of Manila in a historic case over the West Philippine Sea (South China Sea).

Ernest Bower, senior adviser at the Washington-based Center for Strategic and International Studies (CSIS), made this recommendation when sought for comment on Monday, June 6.

“I think the Filipinos should try to do that and try to build an international consensus for China to abide by the ruling,” Bower said on the sidelines of a forum organized by the University of the Philippines Institute for Maritime Affairs and Law of the Sea.

Bower was responding to a question on possible scenarios if an arbitral tribunal based in The Hague, Netherlands, soon issues a ruling that favors the Philippines.

He said that in case of a favorable ruling, Filipinos should mount “an international effort to immediately respond and support the ruling and the rule of law in the South China Sea.”

If needed, he said the Philippines “should then take the case” to the United Nations (UN) General Assembly.

Bower cited the example of Nicaragua, which defeated the US in a landmark case before the International Court of Justice (ICJ) in June 1986.

Back then, the US refused to heed the ICJ ruling. In reaction, Nicaragua petitioned the UN to force the US to follow the ICJ.

The UN acted in favor of Nicaragua. In November 1986, the UN General Assembly made an urgent call for the “full and immediate compliance” with the ICJ ruling.

Incidentally, Nicaragua’s lawyer in this case was Paul Reichler, the Philippines’ lead counsel against China in its pending case over the West Philippine Sea.

Bower said the Philippines can follow Nicaragua’s lead in bringing the case to the UN if China snubs the Hague tribunal’s ruling.

In any case, he said, China should understand “that not acknowledging the rule of law is against its own national security and national economic interests.”

“And when China believes that, because the rest of the world is supporting the decision and is pressuring China to abide by the law, then China might change,” Bower said.

China, however, has repeatedly rejected the arbitration proceedings at The Hague. The Asian giant has said it prefers bilateral or one-on-one talks with the Philippines.

Philippine President-elect Rodrigo Duterte has said he is open to bilateral talks with China, but only after having explored a multilateral set-up, which involves a 3rd party, in 3 or 4 years.

China has resisted 3rd-party involvement in the dispute, saying the issue should be resolved only by the parties directly involved. – Rappler.com