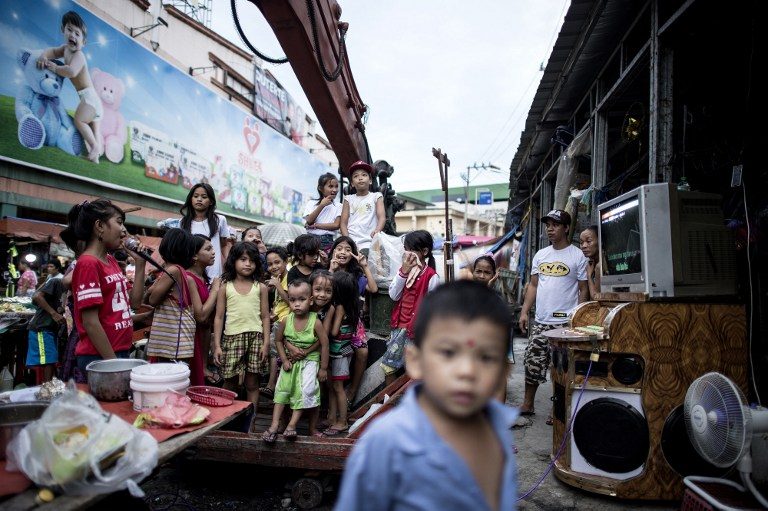 Facebook Twitter Copy URL
Copied
Across the nation police have already reported killing more than 20 alleged drug suspects over the past fortnight, egged on by Duterte who has urged them to begin his war on crime even before he takes office at the end of this month

MANILA, Philippines – Armed police are detaining crying children, bewildered drunks and shirtless men throughout the Philippine capital in a night-time blitz that is offering an authoritarian taste of life under President-elect Rodrigo Duterte.

The incendiary lawyer won last month’s elections in a landslide largely on a pledge to end or suppress what he said was rampant crime, warning the Philippines was in danger of becoming a narco-state and that tens of thousands of criminals would be killed in his crackdown.

Across the nation police have already reported killing more than 20 alleged drug suspects over the past fortnight, egged on by Duterte who has urged them to begin his war on crime even before he takes office at the end of this month.

The efforts by police in Manila, a chaotic mega-city of more than 12 million people, to clean up the streets ahead of Duterte being sworn in casts a light on other controversial aspects of his law-and-order campaign.

Since winning, Duterte has said he will impose late-night bans on children walking the streets, alcohol sales and the national passion of karaoke singing – insisting that his crackdown must start with the fundamentals of discipline in society.

Police in Manila, eager to burnish their tough-guy credentials for their new boss, have in recent weeks begun their own versions of such night-time curfews that have seen hundreds of people detained.

In some districts police have even named the crackdowns “Oplan RODY” – an acronym for Rid the Streets of Drinkers and Youths that is also Duterte’s nickname.

“We all know drinking in the streets and youth roaming the streets at night are a formula for crime,” Senior Superintendent Jemar Modequillo told Agencre France-Presse (AFP) as he led Oplan RODY’s sweep through a large southern Manila slum called CAA.

When AFP accompanied Modequillo’s forces through CAA, children aged under 10 were taken away in police vehicles.

Two girls were in tears as they were led away by armed officers even though they were out with adult relatives.

Under Modequillo’s operation, the children were taken back to the police station for lectures and to be picked-up later by parents.

But in another part of the Manila, parents of children found on the streets at night alone were jailed.

Duterte has said he intends to similarly jail parents for “abandonment”, while the children will be sent to be cared for by the already overwhelmed social welfare department.

Under Modequillo’s Oplan RODY, more than 100 adults deemed to be drunk or disorderly were detained and given the option of doing 40 push ups at the police station or a fine and a short prison stint. All chose the former.

Some said they had been unfairly detained.

Sitting on the police station’s floor, Rafael Ganton insisted he was sober but that his apparent crime was being outside on a sweltering night without a shirt on.

“I was just going to lock the doors of our billiards shop,” Ganton said.

Jose Diokno, chairman of the Free Legal Assistance Group, which lawyers for victims of human rights abuses, said the operations were concerning on many levels, including that armed police were traumatising children.

Diokno also voiced concern that Duterte’s war on crime, like with Oplan RODY now, would target the poor.

“They are the weakest sector of society the easiest to oppress, they are already oppressed,” Diokno told AFP.

Since winning, Duterte has said he will also offer bounties to police to kill criminals.

Even hardened anti-crime figures in the Philippines have warned such incitements could lead to a breakdown in the rule of law, and mob rule.

“The situation could escalate into a serious peace and order problem in the entire country,” said senator-elect and former national police chief Panfilo Lacson.

Diokno said he was “appalled” by Duterte’s call for citizens to kill suspected criminals.

“It’s an invitation for people to take the law into their own hands,” Diokno said.

Unidentified gunmen have killed at least nine drug suspects over the past fortnight, according to police statistics, raising fears that vigilante murders have already begun.

The murders have echoes of Duterte’s two-decade rule of the southern city of Davao.

He said he turned the city into one of the nation’s safest but rights groups say vigilante death squads have killed more than 1,000 people there.

Duterte has variously denied and boasted about links to the death squads, but has been unequivocal about what is in store for the Philippines when he becomes president.

“I intend to instil fear in the criminals,” he said after winning the election. – Rappler.com