MANILA, Phiippines – The Department of Environment and Natural Resources (DENR) may have initially been offered to the Communist Party of the Philippines (CPP), but the party’s founding chairman does not mind that it ended up in Gina Lopez’s hands.

“Gina Lopez is acceptable because she is a dedicated activist against abusive mining that ruins the indigenous communities, environment, agriculture, and our chances of processing the mineral ores and industrializing our country,” Jose Maria “Joma” Sison told Rappler in an online interview.

Sison, the chief political consultant of the National Democratic Front (NDF), which selected the nominees for the posts offered to the Left, recognized Lopez’s stance “against the dirty types of energy that result in global warming and more frequent and worse droughts and typhoons.”

During the campaign, Lopez helped launch the Green Thumb Coalition, a network of over 40 civil society organizations that raised the following 9 environmental issues with presidential bets:

Then-presidential bet Rodrigo Duterte vowed that he would only allow mining if environmental laws are strictly followed. 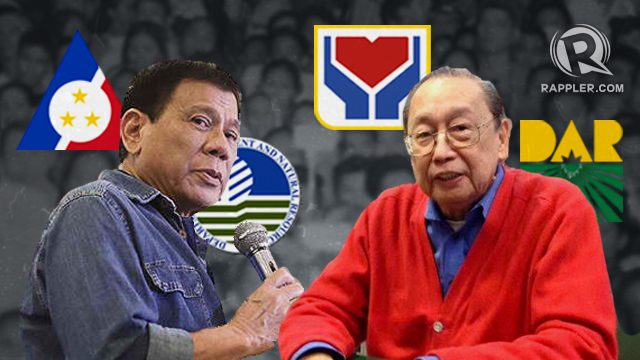 There was talk that Bayan Muna Representative Carlos Isagani Zarate was the Left’s choice for the post. However, Sison said he understood that it was ultimately up to Duterte to decide.

The president-elect offered the DENR post to Lopez on Monday, June 20. The environmental advocate accepted the next day, June 21.

“The CPP and NDFP have declared that they are pleased so long as a position goes to someone highly qualified and who is patriotic and progressive,” Sison said.

He also noted that the activist environmental group Kalikasan People’s Network for the Environment (Kalikasan) earlier expressed support for Lopez.

Duterte has already named at least 3 personalities endorsed by the Left who will join his administration. They are University of the Philippines professor Judy Taguiwalo (Department of Social Welfare and Development secretary), former Anakpawis party list representative Rafael Mariano (Department of Agrarian Reform secretary), and Joel Maglunsod, a leader from the progressive labor group Kilusang Mayo Uno (Department of Labor and Employment undersecretary). – Rappler.com