Jun 22, 2016 8:45 PM PHT
Pia Ranada
Facebook Twitter Copy URL
Copied
Duterte's camp also reveals that the president-elect might use a teleprompter for his inaugural speech and that organizers are doing away with a vin d'honneur for diplomats 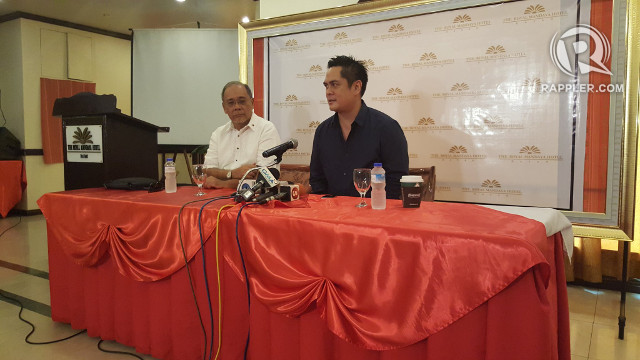 DAVAO CITY, Philippines – There are now 627 names in the guest list for the inauguration of President-elect Rodrigo Duterte.

“So far, we have around 627 guests inside the Rizal Hall. From 500 it has jumped to 627,” said incoming Communications Secretary Martin Andanar on Wednesday, June 22.

Rizal Hall in Malacañang Palace is set to be the venue for Duterte’s inauguration on June 30.

Andanar, speaking at a press conference in Davao City, said that the list with 627 names is not yet final. Organizers might decide to reduce or add to the number, or keep it as is.

The councilors, however, were told they are not allowed to bring their spouses, said Garcia.

Andanar said that the guest list will most likely include Duterte’s family, incoming Cabinet members, close friends, and diplomats.

Andanar revealed other details about Inauguration Day. For one, Duterte’s team has decided not to have a vin d’honneur, a formal reception where wine is usually served.

The vin d’honneur was used as the occasion for diplomats to call on the new president right after his inauguration.

After the Marcos years, the practice was stopped to keep the event simple. However, a vin d’honneur is still held at Malacañang Palace every New Year.

Andanar said a vin d’honneur is too flashy for Duterte.

“Sosyalan ‘yun eh (That’s too high-end)…The president is a simple man,” he said.

The Duterte inauguration will instead be followed by a “diplomatic reception.”

Duterte will be assisted by incoming Foreign Secretary Perfecto Yasay Jr when he meets diplomats.

Duterte to use teleprompter?

Media were also amused to hear that Duterte might be using a teleprompter for his inaugural speech.

Andanar said Radio TV Malacañang had sent a teleprompter to Davao City a few weeks ago so Duterte can practice using it.

“I believe the mayor liked the teleprompter. The speech we are preparing right now, it should go through the teleprompter unless the president-elect decides to read it or memorize it,” he said.

But there is also a big possibility that Duterte, being Duterte, will veer away from the prepared speech and extemporize.

Andanar said the speech will most likely use English, Filipino, and Bisaya. Two people, who he did not name, are currently working on the speech.

Duterte, perennially late for events during the campaign season, is expected to be in Malacañang Palace by 10:30 am, when the program is scheduled to start.

First on the day’s events will be the traditional “salubong” when outgoing President Benigno Aquino III will welcome Duterte at the steps to Malacañang Palace and walk him inside.

Aquino will give the Malacañang guestbook to Duterte for him to sign, and then the two will step out of the Palace. Duterte will then give the departure honors to Aquino. Aquino will walk to a waiting car while Duterte goes back inside the Palace.

“It will be a very brief, simple encounter between the outgoing and incoming,” said incoming Presidential Spokesman Ernie Abella.

In the Constitution, the incoming president is supposed to take his oath at 12 noon on June 30.

Andanar gave assurances that Duterte will not be late for his oath-taking.

Duterte is known to make public appearances only after lunch because of his penchant for staying up late at night. Duterte has already said his days as president will begin at 1 pm. – Rappler.com