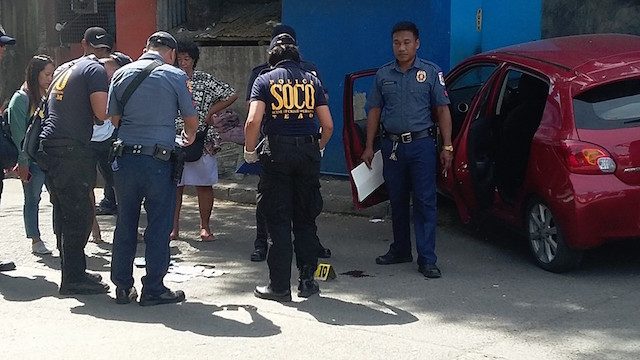 Facebook Twitter Copy URL
Copied
Unidentified gunmen kill a village chairman on Friday morning, allegedly due to his involvement in the drug trade

TUGUEGARAO CITY, Philippines – A barangay (village) chairman was gunned down in this city on Friday morning, June 24, with investigators looking into his alleged involvement in the illegal drug trade as a possible motive behind the killing.

Mackenrick Pagulayan, chairman of Balzain East village, was killed by unidentified gunmen after driving his daughter to school.

The victim, riding an unregistered red Mitsubishi Mirage, took a right turn when a black car hit them in the back, causing them to bump a concrete barrier.

One of the gunmen then went out of the vehicle and shot the the victim’s car several times. Pagulayan was dead on the spot.

Pagulayan’s wife, Jamila Kaye, and a certain Daryll Tumaneng, were wounded and rushed to the hospital.

The crime was caught by a closed circuit television camera (CCTV) of a bar and grill establishment.

But Tamayao said Pagulayan has not been placed under a watchlist of drug traders in the city, nor has he been charged for drug pushing.

Rappler sent an inquiry to the Philippine Drug Enforcement Agency to verify if the victim was under their watchlist, but there has been no response as of press time.

In a phone interview with local radio, mayor-elect Jefferson Soriano said that the victim’s possible involvement in illegal drugs was the motive behind the killing.

Soriano said that 24 of the 49 villages in Tuguegarao are affected by drugs.

The killing incident was the second in the city in less than 24 hours.

On Thursday afternoon, a 35-year old woman was killed by still unidentified gunmen.

According to police reports, the victim had records of theft cases in the city.

Several residents also expressed alarm due to the recent spate of what they called “extra-judicial killings” in the city.

City Councilor Maila Que said, “No matter the reason or provocation, every human being deserves to have a fair trial and to defend themselves legally against any and all kinds of accusations thrown their way.”

Randy Malayao, a consultant of the National Democratic Front of the Philippines, said the victims should be given justice. – Rappler.com