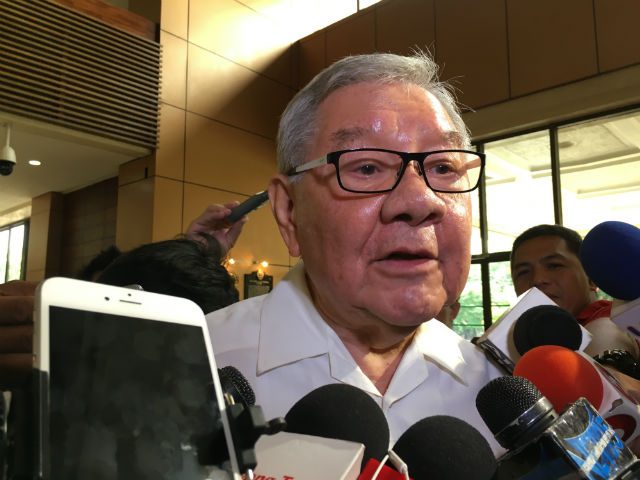 “You know, I don’t know where the word impeachment comes. But let’s face it – the chances of that is zero and nobody will even think of it,” Belmonte told reporters on Tuesday, June 28.

“Let’s give the new president the chance to run the country without talk of impeachment or anything like that being uttered by anybody of whatever political party,” he added.

A day before, Duterte said in his last flag ceremony as Davao City mayor that he is not afraid of possible impeachment charges to be filed against him by his critics, who are wary of the policies he would implement to fulfill his promise to suppress crime and drugs within 3 to 6 months. (READ: Drug suspect killings rise ahead of Duterte presidency)

“I won. Why? Because I was the person carrying the right message – corruption in government, criminality. I will fulfill my promise regardless of who will be affected. I will stake my honor, my life, and presidency itself,” said Duterte.

“Impeachment? Go ahead. I have no problem with that.  I will insist on what I promised to the people,” he added.

But Belmonte on Tuesday dismissed talks of impeachment as mere intrigue.

(That’s big nonsense. That’s intrigue being spread by people who I know are not from the media.)

Belmonte, who is part of the Liberal Party (LP), added that “negative ideas” like impeachment cases should not be discussed ahead of the Duterte presidency.

“Why should we be talking about that? We should be talking about confidence about achieving [things] and so forth. Hindi ‘yung parang may takutan na rito, may negativism na (Let’s not have negativism and make it appear that there are threats). It’s a new administration. Let’s think positive as people, as politicians,” he said.

“Let’s look forward to great achievements for our people instead of talking about negative ideas like that. We are doing ourselves a disservice as a people by talking about that,” he added.

Give Duterte and Robredo ‘a chance’

Belmonte also dismissed talks that the LP may be behind the supposed plans to impeach Duterte, who is part of the Partido Demokratiko Pilipino-Lakas ng Bayan (PDP-Laban) party.

Davao del Norte Representative Pantaleon Alvarez, whom PDP-Laban has endorsed to gun for the speakership, claimed that at least 50 LP lawmakers have switched to PDP-Laban. The number is equivalent to half of the LP membership in the Lower House. (READ: Aquino: I understand LP lawmakers jumping ship to PDP-Laban)

Duterte is also yet to meet with LP member Vice President-elect Leni Robredo. Duterte said he is “non-committal” about giving Robredo a Cabinet post because he does not want to hurt the feelings of his friend, defeated vice presidential bet and Senator Ferdinand “Bongbong” Marcos Jr.

Could this be the reason why there are rumors that LP is planning to impeach Duterte?

“I don’t want to read anything like that. I think that it’s just a matter of time before they themselves get on working relations with each other,” said Belmonte.

In a recent trip to Japan, Robredo urged Filipinos to set aside their political differences and unite behind Duterte. – Rappler.com