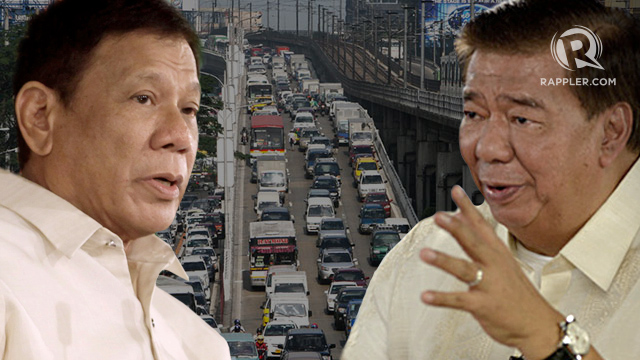 Drilon sent the media a copy of the Transportation Crisis Act of 2016 on Friday, July 1. It is a response to Duterte’s statement that he might request Congress for emergency powers to deal with transportation concerns in the National Capital Region.

In his explanatory note, Drilon said the traffic cost is expected to increase from P2.4 billion to P6 billion a day if left unsolved. (READ: Cable cars to ease Metro Manila’s traffic woes?)

The senator said that traffic is worsening due to population growth and high economic development. However, there is a lack of the necessary infrastructure, quality public transportation services, proper traffic management, strong enforcement agencies, and disciplined motorists.

“On the other hand, our poor traffic management woes are mainly due to poor enforcement of traffic rules and the overlapping functions of government institutions,” he said.

“It is imperative therefore to give the President of the Philippines emergency powers to immediately address the crisis. Otherwise, its cost to the economy and environment, as well as to the functionality and livability of our cities, will continue to hamper our overall growth and development,” Drilon added.

If passed, the Transportation Crisis Act of 2016 would authorize Duterte to adopt alternative methods of procurement for the construction, repair, rehabilitation, and the improvement or maintenance of transportation projects that will finally curb the longstanding Metro Manila traffic problem.

The Metropolitan Manila Development Authority (MMDA) and the Department of Transportation (DOT) would be the “urban traffic management authority” in the National Capital Region and other urban areas, respectively.

The LTRFB, LTO, and local government units would also be prohibited from issuing any rules or ordinance that would be in conflict with the Transportation Crisis Act of 2016.

Currently, a number of cities in Metro Manila have traffic ordinances that are not in sync with MMDA’s traffic scheme.

The emergency powers would be bestowed on the President for two years once the bill is passed into law. – Rappler.com