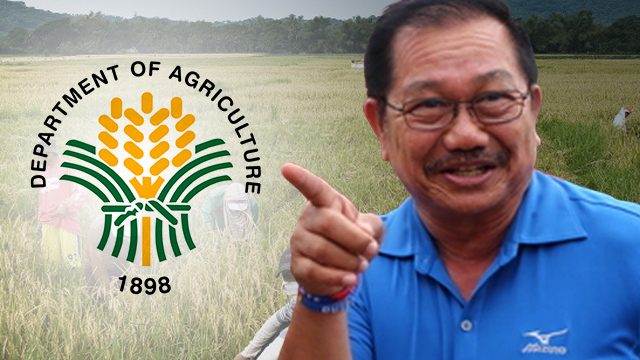 In a Facebook post on Saturday, July 2, entitled “Wrong data, wrong planning,” Piñol said he admonished the DA on Thursday for using 40-year-old information when he was briefed about the soils analysis data the department had been using.

“The briefing, which was conducted by a special group called AMIA or Adaptation and Mitigation Initiative in Agriculture, was supposed to present to me the actions that will be taken to prepare the country for the effects of climate change and to indicate what crops are suited to be planted in which areas,” he narrated.

Piñol said when he “confronted” the presenters with the accuracy of their data, they admitted they were basing the findings on soil samplings

He added that an official from the Bureau of Soil and Water Management (BSWM) told him that their request for additional budget for soil mapping was denied, but Piñol admitted he had “no way of validating that claim.”

“In the end, I told the AMIA presenter and BSWM officials to submit to me an estimated budget requirement for the conduct of a national soil testing so that President Rody Duterte’s order for DA to come up with a Color Coded Agriculture Guide Map would be realized during the first 100 days of his term,” said Piñol.

He said he is imposing a 45-day deadline to allow farmers to determine the appropriate crops and fertilizers they should use for the next planting season.

“Success in agriculture is all about correct data, right strategy and immediate action,” said Piñol, who already promised the DA officials the necessary financial support to accomplish the task.

“Why is a national soil sampling important? A national soil testing and sampling is very vital in determining which region of the country could grow which crop best based on soil components and fertility,” said Piñol in his Facebook post.

He added that a national soil sampling would “effectively” guide the DA and Filipino farmers in determining nutrient deficiencies in soils in specific areas across the country.

Doing so, said the agriculture secretary, would be critical in identifying what type of fertilizers should be used to ensure productivity. (READ: DA cites role of healthy soils in food security)

“I have given them a very short timeline though. I would like everything to be completed in 45 days,” said Piñol. (READ: ‘Inclusive growth must start with agriculture’)

But should officials fail, Piñol said he would ask them to leave government.

“That is how it is in the Duterte presidency: Produce results or leave government to others who could do better. #Changeiscoming,” he said. – Rappler.com