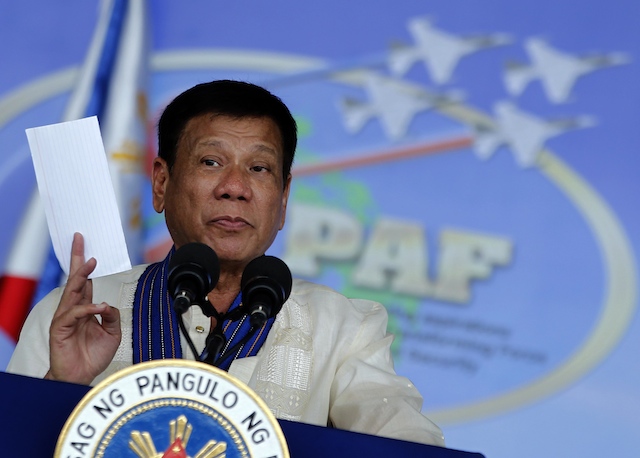 “I am compelled by my sense of duty to tell you the police who contributed to deterioration of law and order in this country,” he said at the 69th anniversary of the Philippine Air Force in Clark Freeport.

“As this time, I order them relieved from their assignments and report to the (Philippine National Police) Director General who would like to talk to them but certainly I would expect the police commission to do their thing. Investigate niyo ito at ‘wag niyo akong bigyan ng zarzuela. Hanapin ninyo ang totoo. (Investigate them, don’t give me a farce. Search for the truth),” he said.

The generals denied the President’s allegations, saying they’re willing to be investigated to prove their innocence. (READ: Generals to Duterte: We’re not involved in illegal drugs)

Pagdilao, Tinio, and Diaz are still in active service but were relieved from their posts on July 1, when PNP chief Director General Ronald dela Rosa assumed command of the police force and implemented a revamp.

Pagdilao and Diaz are 1984 graduates of the Philippine Military Academy, the class that has as one of its “adopted” mistahs (classmates) defeated presidential candidate and former interior secretary Manuel “Mar” Roxas II.

Garbo, on the other hand, was once considered for PNP chief when Roxas was interior secretary. Garbo was even endorsed to the position by former Senate President Franklin Drilon.

Diaz was among the police generals seen in a hotel at the height of the May elections campaign, the same hotel where Roxas’ campaign staff were also seen meeting. Diaz was at the time police chief of Western Visayas, a bailiwick of Roxas.

Loot is the newly elected mayor of Daanbantayan in Cebu. He won by 7 votes over a Roxas ally. (READ: Incumbent mayor who won by 7 votes won’t concede)

Dela Rosa said he was surprised by the President’s statements but vowed to investigate the officials. (READ: PNP chief to probe generals named by Duterte)

Duterte said that even when he was still Davao City mayor, he had been hearing the names of police generals allegedly involved in the drug trade.

Duterte lamented that the education of these police officers and others allegedly like them were funded by taxpayers’ money, but they turned to drug trafficking that destroy people’s lives.

“Masakit pakinggan kasi ginastusan mo na, pinag-aral, lahat ng uniporme, pati medyas, sapatos gastos mo, tapos (It hurts because you spent on them, sent them to school, from uniforms, socks, shoes, and) you commit, by any language, it is really treason,” he said.

As for other government officials allegedly involved in illegal drugs, Duterte said there is an ongoing investigation on this.

He reiterated that he is assuming “full legal responsibility for it.”

“I am not ready yet with the other branches of government, agencies like Customs – I still have to validate, but I already have the raw information,” Duterte said.

Diaz also cited his “personal reasons” to prove that he abhors illegal drugs – a younger brother who had to go to a rehabilitation center thrice to cure his addiction; a male cousin who died because of substance abuse; and another cousin, a 21-year-old woman, who was killed by a drug addict.

“Wala pong katotohanan na ako ay protektor ng mga sindikato (There is no truth to the accusation that I protect drug syndicates),” he said.

The former NCR police director also said he is ready to submit to any investigation and defend his name. – Rappler.com