Jul 12, 2016 12:04 PM PHT
Jee Y. Geronimo
Facebook Twitter Copy URL
Copied
'We have to change that,' the environment secretary says of the Mining Act of 1995. She says the law is 'skewed towards the mining sector, and not towards our people.' 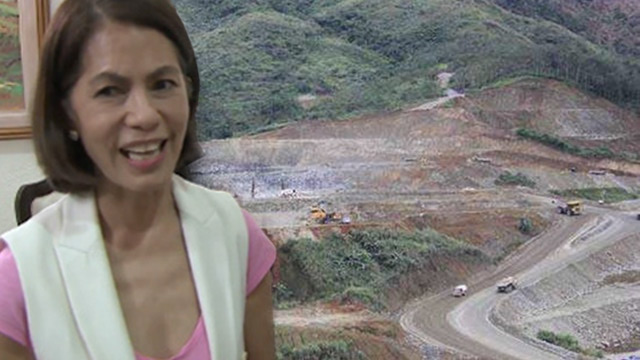 MANILA, Philippines – Environment Secretary Gina Lopez believes it’s time to change the Philippine Mining Act since she said it’s an “unfair” law that is “skewed towards the mining sector, and not towards our people.”

“We have to change that…. Sabi [ng mining companies] they’re giving to economy. What? Out of P35 billion net, P29 billion pumupunta sa mining company, only P6 billion goes to the country, and out of that P6 billion, kaunting-kaunti [ang] pumupunta sa komunidad, like almost nothing,” Lopez said in a DZMM interview on Tuesday morning, July 12.

Environmental groups have also called on policymakers to repeal the Mining Act of 1995. They want a law that would protect the rights of Filipino mining workers, local communities, and state interests. (READ: TIMELINE: Philippine mining laws and policies)

Lopez, a known anti-mining advocate before her appointment as head of the Department of Environment and Natural Resources (DENR), again reiterated on Tuesday that she is not against the mining industry, but she’s against the suffering of people in mining communities.

“You cannot build an economy, a company based on suffering. I will not allow it to happen in DENR,” she said, as she again warned mining companies to get their act together. (READ: Lopez to DENR officials: ‘Be proactive, inspire people’)

Lopez immediately ordered an audit of all existing mines in the country on her first day as environment secretary.

The Supreme Court in June issued a Writ of Kalikasan against these mining companies, ordering them to defend themselves before the appellate court.

‘Audit will be fair’

On Tuesday, Lopez said these companies are not adhering to progressive rehabilitation, leaving people in Zambales to suffer “big time.”

“There was a Writ of Kalikasan from the Supreme Court that recognizes that place is really environmentally vulnerable. And then we saw it really suffered. One, they cut 20,000 trees without a permit and then the community health was suffering, and if you see the pictures, the fish ponds dried up because of too much nickel going there,” she said in a mix of English and Filipino.

“And the river was full of nickel, even the sea, I could see nickel there, and the rice fields [have] nickel. You can’t do business while doing that.”

Responsible mining, she reiterated, does not impede on the well-being of present and future generations.

Lopez said the ongoing audit is not just technical but also social and environmental, since the audit team also consists of agriculturists, fishery experts, water experts, and those involved in community development.

“The audit will be fair. I commit to the truth,” she said, warning companies that violate the law that they will “face the consequences.”

During the interview, Lopez revealed that President Rodrigo Duterte also does not like black sand mining. As for planned mining activities in Lobo town in Batangas, she said she will “never allow it, ever.”

“That’s the center of marine biodiversity sa buong planeta (in the whole planet). My God, how can you do mining there? Just this year, they found 138 new marine species. I will never, ever, ever allow mining there. Kailangan alagaan ‘yan, jewel ‘yan ng Pilipinas (We have to take care of that, that’s a jewel of the Philippines),” she added. – Rappler.com