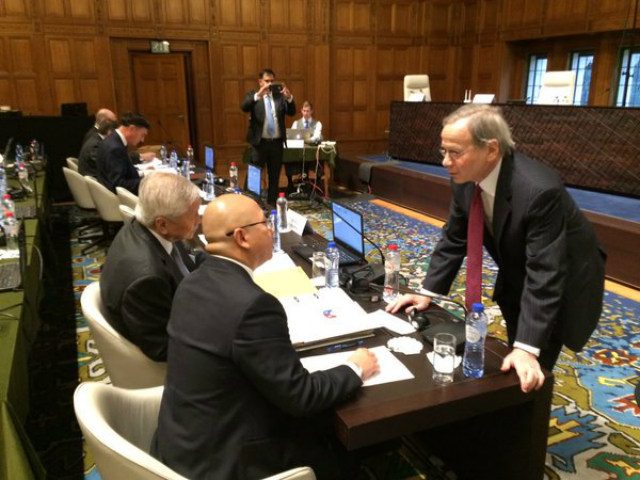 Facebook Twitter Copy URL
Copied
The Philippines’ lead counsel, Paul Reichler, says this will depend 'on how vigorously' the affected states 'assert their rights against China'

MANILA, Philippines – Now that the Philippines won its historic case against China over the West Philippine Sea (South China Sea), the question is how to enforce this ruling given that there is no international police to do this.

The Philippines’ lead counsel against China, Paul Reichler, said that enforcement “will depend on the conduct of other affected states and the international community in general.”

In a telephone conference with select journalists, Reichler explained, “It will depend to a great extent on how vigorously all of the affected states, all of the states which have been prejudiced by the 9-dash line, assert their rights against China.”

An arbitral tribunal at the Permanent Court of Arbitration (PCA) on Tuesday said that “there was no legal basis for China to claim historic rights to resources, in excess of the rights provided for by the Convention, within the sea areas falling within the ‘9-dash line.'”

In his telephone conference on Tuesday, Reichler explained that, by saying the words “vigorous” and “assert,” he means vigorously asserting rights “diplomatically, legally, and above all peacefully.”

‘Not only a victory for the Philippines’

Reichler said: “If these other states stand up for their rights in the way that the Philippines has done, you’ll get the situation where all of the neighboring states are insisting that China withdraw its illegal claims and respect their legal rights which have been defined and recognized and acknowledged today, because those states have the same rights as the Philippines.”

Reichler pointed out that the ruling “is also a great victory for the other coastal states along the South China Sea, in particular Vietnam, Indonesia, and Malaysia.”

He explained that “although the award is legally binding only on the two parties, China and the Philippines, it has very strong implications for other coastal states in the South China Sea.”

Reichler earlier said China runs the risk of being called an international outlaw.

“International pressure is the court’s only enforcement mechanism,” the Asia Maritime Transparency Initiative said on its website. – Rappler.com