China rejects talks with PH if ‘based on ruling’ 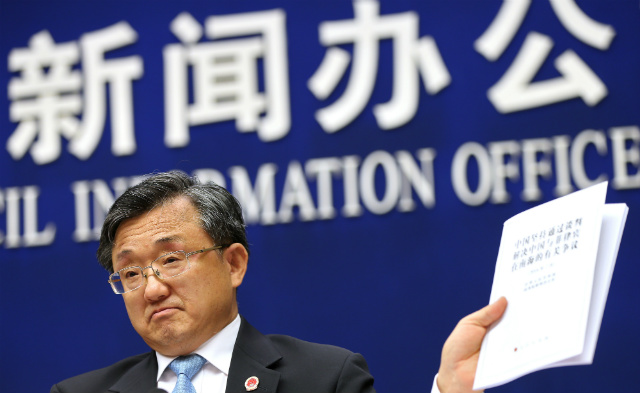 MANILA, Philippines – While Manila eyes bilateral talks with Beijing, China said it cannot negotiate with the Philippines if the Duterte administration does not junk a historic ruling on the West Philippine Sea (South China Sea).

“China will not allow any negotiation based on the ruling,” Chinese Vice Foreign Minister Liu Zhenmin said in a briefing Wednesday, July 13.

Liu made this statement after a journalist asked him if it is “a precondition for the resumption of negotiations that the Philippines should also not accept the ruling.”

This ruling by an arbitral tribunal in The Hague, Netherlands, invalidated China’s expansive claim over the disputed waters. The Philippines “welcomed” the decision but China, as expected, snubbed it.

Liu said: “China expects the new Filipino government to cooperate and recognize that the ruling is nothing more than a piece of waste paper and cannot be enforced. China hopes that the Filipino side will set aside the award and return to the negotiation table.”

This comes as President Rodrigo Duterte wants to engage China in bilateral or one-on-one talks, according to his Cabinet members.

Duterte, who has met with Chinese Ambassador Zhao Jianhua at least 3 times, is considering offers of “goodwill” from China, such as building a railway from Metro Manila to Clark in two years. (READ: Duterte: PH won’t ‘flaunt’ sea dispute ruling vs China)

“We have to talk with China. We could not avoid it,” Justice Secretary Vitaliano Aguirre II said Thursday, July 14.

Quoting Duterte, Budget Secretary Benjamin Diokno said, “We will start the bilateral talks, and now we’re starting from a better position because of that decision, because we’re in the right place.”

Even under former president Benigno Aquino III, government officials shared the same view: A favorable ruling can serve as leverage in bilateral talks with Beijing.

A victory in The Hague will allow the Philippines to “at least negotiate from a strong position,” Philippine Department of Foreign Affairs spokesman Charles Jose said in April 2015.

Liu, however, said China views the Hague tribunal’s ruling as “merely a pile of invalid papers which will never be observed.”

Liu said: “I kindly advise you to throw the papers concerning the arbitration into the rubbish bin, put them aside on book shelves, or put them in the archives. The disputes will eventually have to return to the table for negotiations and China hopes the Philippines to return to the track of bilateral negotiations.” – Rappler.com