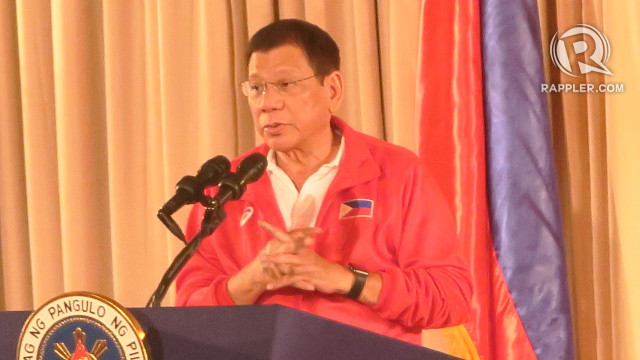 “You are trying to stymie us with an agreement na ganito lang kayo (that you will stay this way)…That’s stupid. I will not honor that. Sabi niya (He said), you signed. That was not my signature,” said the Philippine president during a meeting with Philippine Olympics athletes on Monday, July 18, in Malacañang Palace.

Duterte was referring to an instance in which he was asked by an ambassador if the Philippines would be able to limit its carbon emissions – carbon dioxide spewed by economic sectors like industrialization, transportation, agriculture, waste management, and more.

Duterte did not specify which international agreement signed by the Philippine government the ambassador was referring to.

But most likely, it was the Paris Agreement on Climate Change to which the Philippines pledged support during the United Nations Framework Convention on Climate Change 21st Conference of Parties (COP21) held in France last December. (READ: PH on Paris climate pact: Monumental feat for humanity)

The climate deal has been hailed as the first universal, legally-binding agreement on climate change. It has been signed by 175 countries who, through the deal, pledge to reduce the amount of carbon they emit and to ensure their citizens are prepared for the effects of global warming. (READ: Full text of the Paris agreement)

The Philippines has promised to reduce its carbon emissions by 70% by the year 2030, with aid from the international community.

But Duterte seems convinced that the climate agreement seeks to limit the economic growth of developing nations that have pledged to support it.

He repeated arguments of climate justice activists that such requirements on carbon emissions are unfair because the wealthy nations of today were never limited by such impositions when they were industrializing.

“Sabi ko (I said), ‘You do not do it that way Mr Ambassador. You who have reached your apex and along the way spewed a lot of contaminants and emissions and went ahead in destroying the climate, good for you. We are here, we have not reached the age of industrialization. We are going into it,'” said Duterte, narrating his conversation with the envoy.

The Philippine president called the limits on carbon emissions “kalokohan (nonsense)” and added, “I will not follow.”

“That is not my signature. We will make a new one or we do not honor at all,” he said.

Duterte claimed climate change agreements are another way by which developed countries are able to “dictate the destiny” of poorer nations.

“That is how very constrictive our lives are now. It’s being controlled by the world. It’s being imposed upon us by the industrialized countries. They think they can dictate what the destiny [is for] the rest of the nations,” he said.

He compared these countries to “oligarchs” who “enjoy the fat of the land and they don’t really bother to pay taxes.”

His statement comes two weeks after he promised, in his inaugural speech, that the Philippine government under his administration will honor international agreements it has signed.

“On the international front and in the community of nations, let me reiterate that the Republic of the Philippines will honor treaties and international obligations,” he had said.

The Paris Agreement on Climate Change is a historic international deal that seeks to limit global warming to below 2ºC (3.6ºF), with the aim of containing it below 1.5ºC (2.7ºF), above pre-Industrial Revolution levels.

The agreement was the product of over two decades of negotiations by delegations of signatory countries, including the Philippines. In fact, the Philippines is among the most influential developing countries who helped craft the landmark pact. (READ: PH after Paris agreement adoption: Tired but victorious)

The pledge to reduce Philippine carbon emissions by 70% was a pledge submitted by the Philippine government, not an imposition by a developed country.

Part of the Philippines’ Nationally-Determined Contribution (NDC), the figure was arrived at by experts and heads of agencies of the Philippine government under the administration of President Benigno Aquino III.

After the signing of the deal, countries like the Philippines need to ratify the agreement through legislative action. With President Duterte’s view on the matter, it’s not clear how Congress will move forward. – Rappler.com