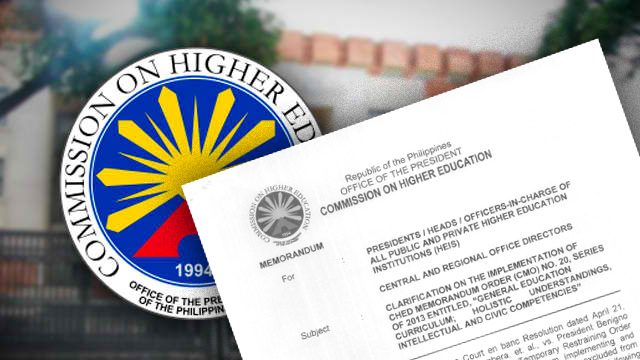 MANILA, Philippines – The Commission on Higher Education (CHED) has ordered all public and private higher education institutions (HEIs) to retain 6 to 9 units of Filipino subjects in their general curriculum, in compliance with a temporary restraining order (TRO) issued by the Supreme Court in 2015.

In a memorandum signed by CHED Chairperson Patricia Licuanan on Monday, July 18, HEIs were instructed “to comply and implement” two CHED memorandums issued in 1996 and 1997 that require the inclusion of Filipino subjects in the general education curriculum:

“All concerned are hereby enjoined to comply and implement the above requirement…during the pendency of the Supreme Court TRO,” the latest CHED memorandum read.

CHED on Monday also told heads of HEIs as well as the commission’s central and regional office directors that “failure to comply may be construed as a direct or indirect violation of the TRO with possible sanctions by the Supreme Court.”

The order comes more than a year after the High Court stopped the implementation and enforcement of another memorandum, CMO 20 series of 2013, “insofar as it excluded from the curriculum for college the course Filipino and Panitikan as core courses.”

CMO 20 introduced a new general curriculum that initially did not include Filipino subjects and other “remedial courses” as these will be devolved to senior high school – the additional two years added to basic education because of the K to 12 program.

Although the new general education curriculum won’t be implemented until school year 2018-2019, advocates of the Filipino language already brought the issue to the SC in April 2015, in a bid to stop what they called an “attack against the national language.”

The TRO was issued just a week after groups filed a petition against the curriculum before the SC.

Tanggol Wika or Alyansa ng mga Tagapagtanggol ng Wikang Filipino (Alliance of Defenders of Filipino), one of the groups that opposed the new curriculum, thanked CHED for following the SC.

But the group also slammed the commission for taking more than a year to act on the TRO.

“We hope that the Supreme Court’s final decision makes the retention of Filipino and Literatura permanent. This small victory is a step in the right direction,” Tanggol Wika spokesperson David Michael San Juan told Rappler in a text message.

“We hope that colleges/universities will follow the new memorandum and instantly revive/resurrect all Filipino and/or Literature Departments that were abolished because of the K to 12,” he added. – Rappler.com