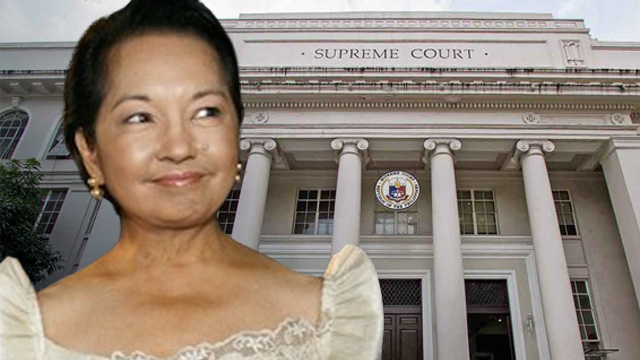 The Supreme Court on Tuesday, July 19, acquitted Mrs Arroyo of plunder as it granted her plea to drop the case against her. This sets in motion her release from the Veterans Memorial Medical Center, where she has been detained since October 2012. (READ: Timeline: Gloria Arroyo – from plunder to acquittal)

SC Spokesman Theodore Te told a press conference Tuesday afternoon that the Court annulled the criminal case for “insufficiency of evidence” and ordered her “immediate release.”

Te said the vote was 11-4 in favor of Arroyo’s petition to junk a Sandiganbayan ruling that gave the go-signal for her plunder trial in connection with charges that she misused funds of the state-run Philippine Charity Sweepstakes Office (PCSO). 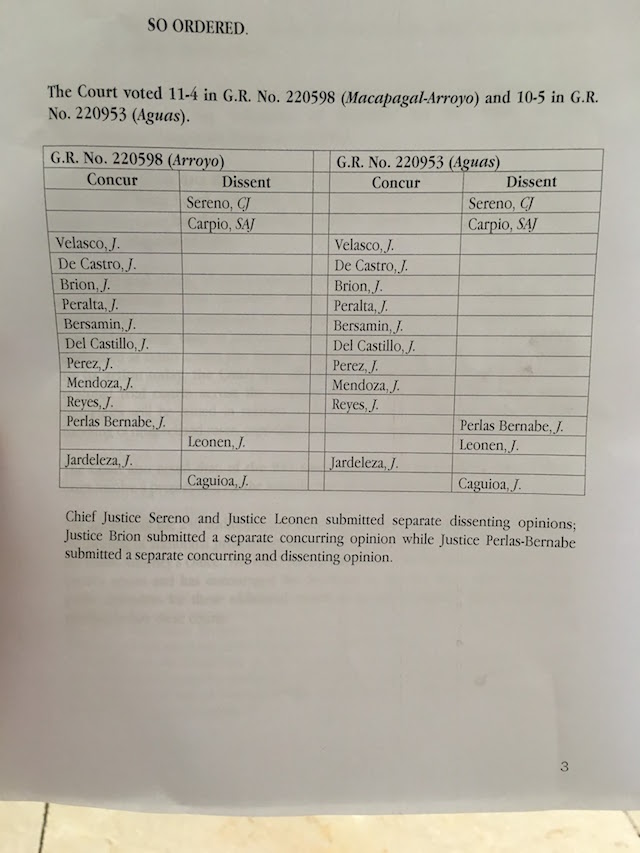 Covered by the case aside from Arroyo is former PCSO budget officer Benigno Aguas, who is detained at Camp Crame. He was also ordered released.

Quoting from the decision, Te said: “Wherefore, the Court grants the petitions for certiorari; annuls and sets aside the resolutions issued in Criminal Case No. SB-12-CRM-0174 by the Sandiganbayan on April 6, 2015 and September 10, 2015; grants the petitioners’ respective demurrers to evidence; dismisses Criminal Case No. SB-12-CRM-0174 as to the petitioners Gloria Macapagal-Arroyo and Benigno Aguas for insufficiency of evidence; ORDERS the immediate release from detention of said petitioners; and makes no pronouncements on costs of suit.”

The justices who dissented or voted against Arroyo are Chief Justice Maria Lourdes Sereno, Senior Associate Justice Antonio Carpio, and Associate Justices Marvic Leonen and Benjamin Caguioa. Of the 4, only Carpio is an appointee of Mrs Arroyo; the rest were appointed by former president Benigno Aquino III.

The 11 justices who ruled in favor of the former president are:

Of the 11, eight are Arroyo appointees and 3 were appointed by Aquino: Bernabe, Reyes and Jardeleza.

One of Arroyo’s lawyers, Raul Lambino, was with her Tuesday at the Veterans hospital.

“Para sa akin, malaya na ang dating Pangulo,” he added. (As far as I am concerned, our president is free.)

Lambino said the Philippine National Police would process Arroyo’s release after the SC releases its verdict.

Arroyo’s other lawyer, Ferdinand Topacio, said in a statement: “The Supreme Court has once again proven itself to be the final bastion of justice and the rule of law. Its ruling today has validated what we have been saying for six years now: that the charges against former President Gloria Macapagal-Arroyo are nothing more than disingenuous attempts at political persecution by a corrupt and inept Aquino administration intent on covering up its gross lack of accomplishments by harassing its political opponents.” (READ: Arroyo camp: Acquittal proves ‘political persecution’ by Aquino)

The Court found the evidence against her weak, the same sources said. Prior to this, the Supreme Court already stopped her trial at the Sandiganbayan.

The 69-year-old Arroyo, who is currently Pampanga representative, is the second Philippine president to be detained for plunder.

In April 2001, ousted president Joseph Estrada was jailed for plunder over charges of unexplained wealth. The Sandiganbayan convicted and sentenced him to life in jail in September 2007. But only 6 weeks after, in October 2007, his successor Arroyo pardoned him.

Tuesday’s landmark ruling on Mrs Arroyo came barely a month after Aquino stepped down from office and less than a week before President Rodrigo Duterte, who favors her release, delivers his first State of the Nation Address (SONA.) (READ: Duterte ready to grant Arroyo pardon)

It was Aquino who jailed Arroyo and subsequently led the impeachment charge against her appointed chief justice, the late Renato Corona.

Through veteran lawyer Estelito Mendoza, Arroyo had petitioned the Supreme Court to approve her “demurrer to evidence,” a plea to dismiss a case on the basis of weak evidence. She went to the High Tribunal for relief after the anti-graft court Sandiganbayan dismissed the demurrer. (READ: What has happened to the Arroyo plunder case?)

Arroyo filed the “demurrer to evidence” in 2014 before the Sandiganbayan. The anti-graft court dismissed this in April 2015, paving the way for her trial for plunder over the alleged misuse of PCSO funds.

Arroyo then challenged the Sandiganbayan ruling before the Supreme Court in a 100-page petition filed by Mendoza.

The Court’s approval of the Arroyo petition in effect acquits her of the P366-million plunder suit filed by the Ombudsman in July 2012 against her and 9 other former goverment officials.

The Ombudsman’s suit, filed a week  before then President Aquino was to deliver his 3rd SONA, alleged that Mrs Arroyo approved the alleged diversion of PCSO’s intelligence funds for purposes not related to the core work of the agency, which is to help indigents and sectors working with them.

On top of this, Arroyo had also asked the Supreme Court to in the meantime stop her trial at the Sandiganbayan. The SC granted this motion last year and extended the trial suspension to this year. – Rappler.com