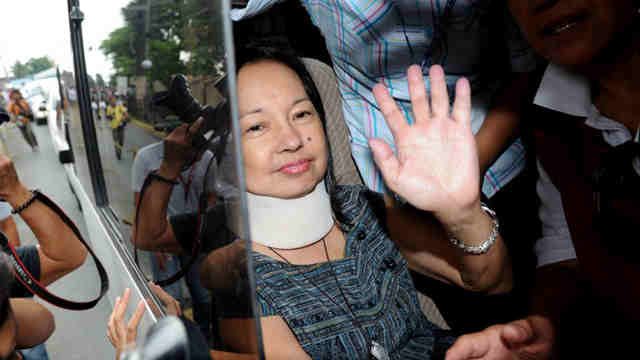 SC Spokesman Theodore Te, in a press conference, read the partial judgment of the High Court.

“Wherefore, the Court GRANTS the petitions for certiorari; ANNULS and SETS ASIDE the resolutions issued in Criminal Case No. SB-12-CRM-0174 by the Sandiganbayan on April 6, 2015 and September 10, 2015; GRANTS the petitioners’ respective demurrers to evidence; DISMISSES Criminal Case No. SB-12-CRM-0174 as to the petitioners Gloria Macapagal-Arroyo and Benigno Aguas for insufficiency of evidence; ORDERS the immediate release from detention of said petitioner; and MAKES no pronouncements on costs of suit.”

Arroyo, who is sick, has been detained at the Veterans Memorial Medical Center in Quezon City for 4 years while her co-accused in the plunder case had long been allowed by the anti-graft court to post bail.

Laurence Arroyo, counsel for the former president, said: “Here, the Supreme Court granted the petition overturning the denial of the demurrer. Ibig sabihin, the SC found that mahina nga ebidensya and as a consequence noon, the accused is acquitted. (This means the SC found that the evidence is weak and as a consequence of that, the accused is acquitted.) So it’s an acquittal in effect.”

Given the immediacy of the decision, lawyer Arroyo said they wre eyeing the release of the former president within the day.

However, the anti-graft court Sandiganbayan’s Judicial and Records Division closed at 4:30 pm, without the SC sheriff serving the decision.

The SC promulgated its decision only two days later, on Thursday, July 21, setting the motion for Arroyo’s possible release on the same day.

After getting the hard copy of the decision, Arroyo said they will ask the sheriff of the anti-graft court to order his client’s release from the Veterans Memorial Medical Center. – with a report from Patty Pasion/Rappler.com