Jul 20, 2016 8:50 AM PHT
Chrisee Dela Paz
Facebook Twitter Copy URL
Copied
'To the public, I'm sorry. I'm sorry to the President [Rodrigo Duterte] because it happened during my 19 days of watch,' the newly-installed transportation chief speaks before a business forum 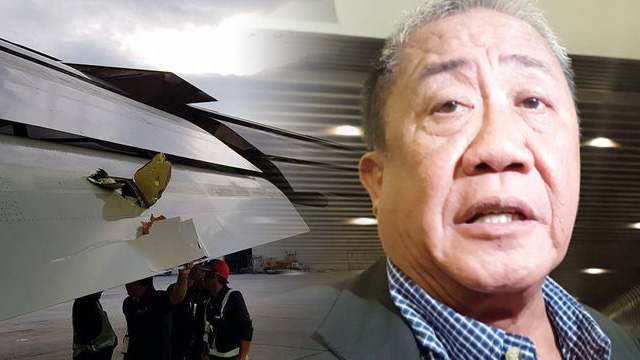 MANILA, Philippines – In front of local airline executives and business leaders, Transportation Secretary Arthur Tugade on Tuesday night, July 19, asked for forgiveness and took full responsibility for the inconvenience brought by the closure of a Ninoy Aquino International Airport (NAIA) runway, which caused delayed and cancelled flights as well as inconvenienced passengers.

“Please accept my apologies for those things we didn’t expect to happen. To the public, I’m sorry. I’m sorry to the President [Rodrigo Duterte] because it happened during my 19 days of watch. I’m assuming 100% responsibility because it happened during my watch,” Tugade said before the World Trade Center Networking Forum and Cocktails in Pasay City.

On Monday, July 18, a NAIA runway was temporarily closed for the repair of a 5-inch deep crack on the asphalt overlay, leading to 28 flight diversions and at least 40 cancelled flights.

Hundreds of affected passengers aired their frustration on social media, with some complaining that they waited more than 8 hours to be served food. (READ: Frustration, anger over NAIA runway closure)

Tugade said the runway, last repaired in 2011, is long due for another overhaul and proper maintenance.

The transportation chief said he asked the Civil Aeronautics Board and the Civil Aviation Authority of the Philippines to review the passengers’ bill of rights.

“I want to find out whether it is written in that bill of rights how long should a passenger stay inside the aircraft when situations like this happen,” Tugade said.

“There is a limitation as to when the airlines can give food because passengers can only tolerate certain moments in time when they are inside an aircraft hungry and sweating because the air conditioning is off,” he added.

Tugade also said briefly that his department is studying the feasibility of building a third runway or another passenger terminal at NAIA.

Suffering from congestion, NAIA has been above its handling capacity of 28 million passengers annually. In 2015, passenger arrivals surged to 50,210.

The transportation chief also asked local airline executives present at the forum to transfer all their turboprop aircraft to the Clark International Airport from NAIA. – Rappler.com