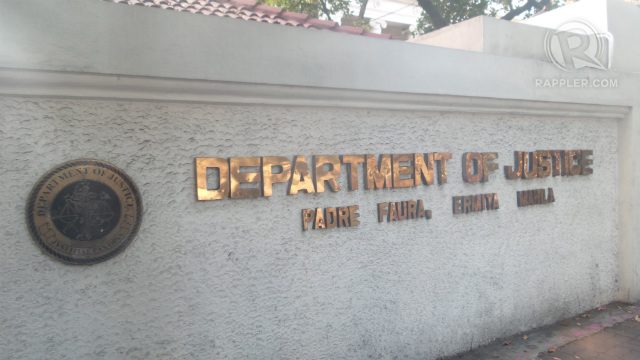 MANILA, Philippines – The Department of Justice will probe two of its former  officials allegedly on the payroll of high-profile convicts, Justice Secretary Vitaliano Aguirre II said on Friday, July 29.

Aguirre said in a news briefing that  he would form a fact-finding team composed of DOJ undersecretaries and prosecutors, who will look into allegations that two former high-ranking officials received bribes from some convicts so the latter can enjoy privileges, including continuing their drug operations, while in prison.

Aguirre refused to identify the former DOJ officials, but said they served the previous administration.

“I’ll be creating a fact-finding committee. Kung kinakailangan (if necessary) this would assist the other investigating bodies,” he said.

He said the committee will complement efforts of the National Bureau of Investigation (NBI) and the Philippine National Police (PNP), which are also gathering evidence and investigating the allegation.

Aguirre said the committee will also investigate why some high-profile inmates were not among those moved from the New Bilibid Prison to the NBI detention facility during the previous administration.

The move was part of the Aquino administration’s campaign to stop drug operations and other illegal activities inside the NBP, following a series of DOJ-led surprise inspections then.

The committee will also check alleged irregularities in the daily meal allowance of the prisoners.

Aguirre said the 24,000 NBP prisoners used to be allotted a daily P50-meal allowance but this was lowered to P40, and some DOJ and NBP officials reportedly pocketed the difference.

‘Religious groups’ behind prostitution at NBP?

The DOJ will also investigate reports that some “religious groups” are acting as fronts for prostitution at the NBP.

Aguirre said he was informed by a representative of a non-governmental organization (NGO) and several prisons guards that some religious groups are allegedly behind the smuggling of female prostitutes inside the NBP and illegal drugs.

“I really don’t know if there is only one group but we have an NGO organization that is saying, they saw me here at the DOJ, and they told me about this prostitution, possible drugs and other prohibited items inside,” he said.

Aguirre said since the SAF was deployed a week ago, the group has seized a total of P1.6 million in cash, sachets of suspected shabu and marijuana from inmates.

Aguirre said surprise raids were also conducted in other penal colonies like Sablayan in Occidental Mindoro, Iwahig in Palawan, and Zamboanga. – Rappler.com