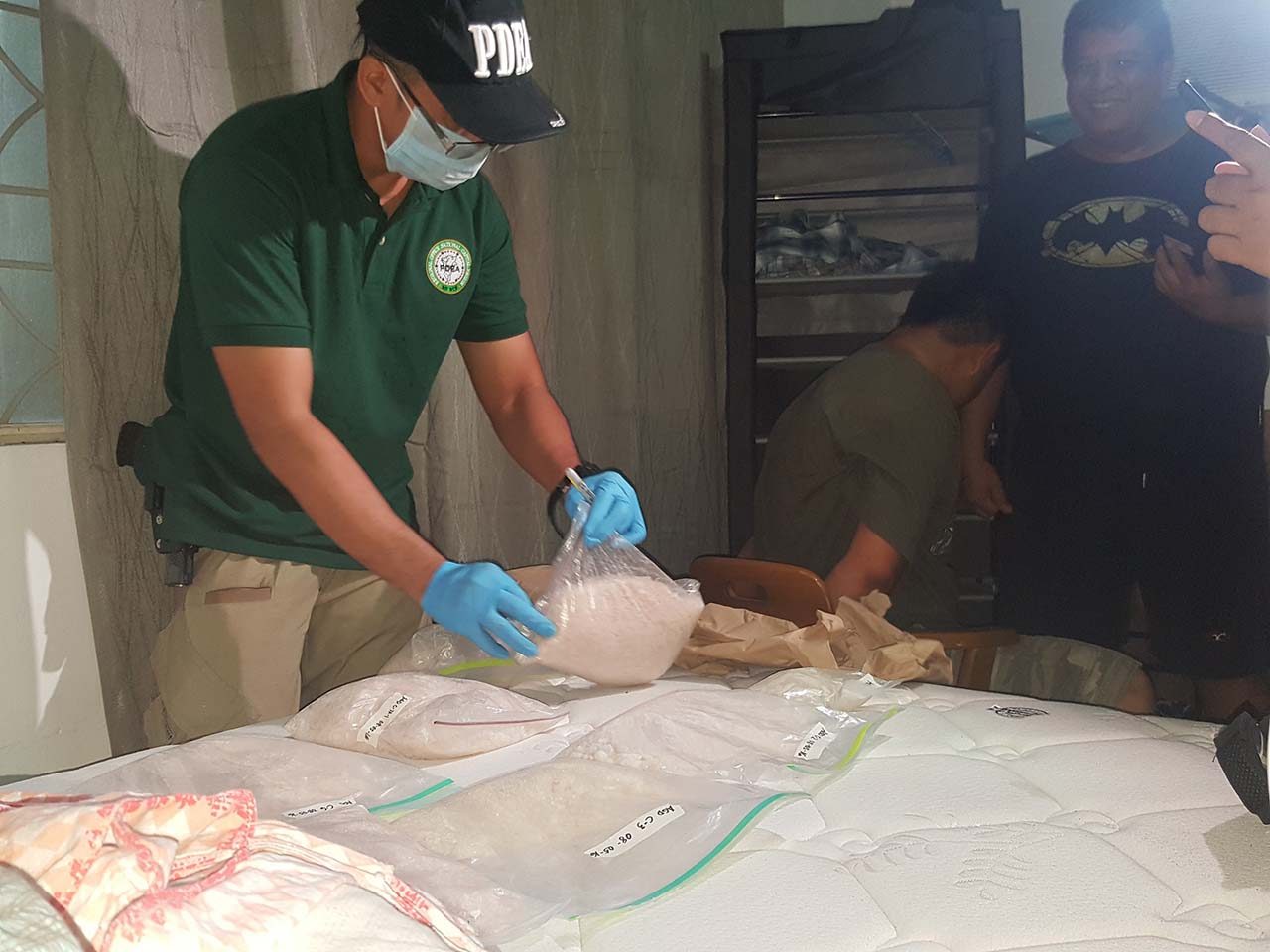 Facebook Twitter Copy URL
Copied
PDEA agents find 30 kilos of shabu with a street value of P100 million in the rented house of Yiye Chen. The person who tipped off authorities on the operation will get a P5-million reward from President Rodrigo Duterte.

PAMPANGA, Philippines – Authorities have arrested an alleged Chinese drug lord in a house reportedly turned into an illegal drugs processing facility in a residential area in Angeles City.

He was arrested on Friday, August 5, after PDEA agents led by Villanueva and Police Regional Office 3 (PRO3) operatives implemented a warrant to search the Chinese tourist’s residence in Hensonville Subdivision in Barangay Malabanias.

The PDEA-NCR director said they have been conducting surveillance operations on the Chinese tourist since July, after an informant told them about the suspected drug lord’s activities here.

On Friday, Villanueva and his men secured a search warrant from Quezon City Regional trial Court Judge Bernelito Fernandez and wasted no time to raid the suspected shabu processing facility with the help of the Central Luzon regional police led by Chief Superintendent Aaron Aquino.

“Yiye Chen was alone in the house when we implemented the search warrant. But in our surveillance operations earlier, we saw other people coming in and out of the house,” he said.

Villanueva said the different colors of shabu found in the house are a result of experiments being done by Chinese chemists to improve the grade or quality of the illegal drugs.

“We have confiscated shabu in various colors in Metro Manila. May pink, may brown. So, malamang dito galing ‘yun. Dito nanggaling ang mga iba-ibang kulay na shabu na nakumpiska ng PDEA sa Metro Manila (The shabu came in pink and brown colors. So it probably originated from here. This is the course of the multicolored shabu confiscated by the PDEA in Metro Manila),” he said.

Plastic bags containing white, brown, and pinkish shabu were found in sports bags tucked under the bed and inside a chest-type freezer.

Villanueva said the illegal drugs were dried and crystallized in the house but manufactured elsewhere.

Aquino agreed with Villanueva. He said there were no shabu manufacturing equipment and machinery found inside the house.

“This house is for drying of shabu only, which is the final process in the manufacturing of shabu,” Aquino said.

Both Villanueva and Aquino believe that the manufacturing laboratory for the confiscated illegal drugs is also located in this city.

Aside from the local market, Aquino believes that the shabu manufactured from laboratories and drying facilities in Angeles City is also exported abroad.

“The Chinese shabu manufacturers also sell their products outside the country. There are many other shabu laboratories and facilities in Angeles City and we have to locate them with the help of the public,” he said.

Villanueva said the person who gave them the information that led to the arrest of the Chinese tourist is expected to get a P5-million reward from President Rodrigo Duterte.

He used this reward to entice the citizenry to turn in suspected drug lords.

(PDEA has called on others who may have information about drug lords and shabu labs. Rather than sell shabu which only earns you little, if you report the location of the shabu lab and pinpoint the drug lord, you would surely get a P5-million reward from the President.)

On May 31, operatives of the Philippine National Police-Anti-Illegal Drugs Group (PNP-AIDG) seized P1.125 billion worth of liquid methamphetamine in a house in another subdivision in Angeles City.

The subject of the operation was Lin Chin Kuan, a Taiwanese. They found some 45 gallons of liquid methamphetamine inside his house in Villa Dolores Subdivision in Santo Domingo village.

The PNP-AIDG operatives were assisted by some Taiwanese anti-illegal drugs operatives, who have been tracking down members of a Taiwanese syndicate operating in the Philippines. – Rappler.com