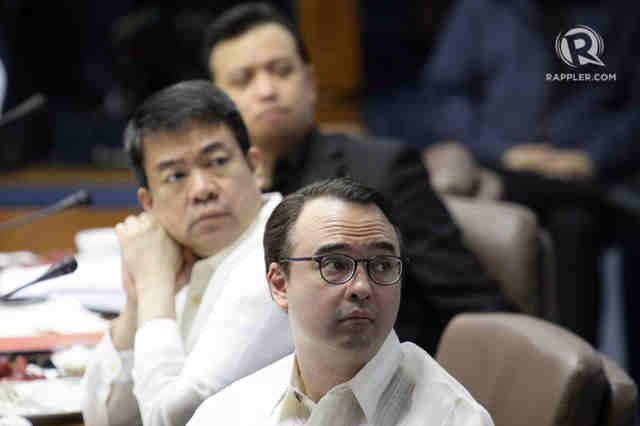 MANILA, Philippines – They may be the usual defenders of President Rodrigo Duterte in the Senate, but Senate President Aquilino Pimentel III and Senator Alan Peter Cayetano disagree with the President on one thing: the decision to give former President Ferdinand Marcos a hero’s burial.

If he would have it his way, Pimentel, Duterte’s party mate in the PDP-Laban, said he would not allow Marcos to be buried in the Libingan ng Mga Bayani. Pimentel, however, was quick to say that he would respect the President’s decision. (READ: Gov’t now preparing for Marcos burial at Libingan)

“If I were president, I would not allow it. I don’t consider him a hero. Ayun lang, di ako president. (But I am not president.) We will respect the decision of the President,” Pimentel told reporters on Monday, August 8.

Party members, however, are torn on the issue, said Pimentel. To solve the seeming gridlock, Pimentel said they have decided to allow members to use “conscience vote.”

“Even before the Digong candidacy, we had already discussed it. It was really a close fight, 50% [in] favor, 50% not in favor,” Pimentel said in a mix of English and Filipino.

Not a ‘cemetery for dictators’

Cayetano, for his part, said Marcos may have done some “heroic” acts in his life, but martial law was clearly not one of them.

While he opposed Duterte’s position – one of the rare times he did so far – Cayetano said he sees the President’s logic in granting a hero’s burial.

“Well, you know, I see the point of the President thatif it’s completely legal issue, he’s entitled to it. But the name of the cemetery is Cemetery for Heroes, and we do not consider him [a hero.] He had heroic moments during his life. But we do not consider it totality heroic because of the things that happened in martial law,” Cayetano said.

“Unless we change the name to Cemetery of Heroes and Dictators, then we would not have problems,” he added.

Cayetano also lauded the Duterte-backed memorandum giving a go-signal for the controversial burial.

Duterte could have just done it days before the intended date, Cayetano said, but the President did not, as he observes transparency.

“That’s why he opened it to the public. He could have come out with the memo or done it 2 or 3 days before. If he gets dissuaded by majority of the Filipino people, good. If not, that’s it, we can move on,” he added. – Rappler.com