Duterte to Sereno: Want me to declare martial law?

Aug 9, 2016 8:09 PM PHT
Pia Ranada
Facebook Twitter Copy URL
Copied
Duterte warns the Supreme Court: 'Do not create a crisis because I will order everybody in the executive department not to honor you' 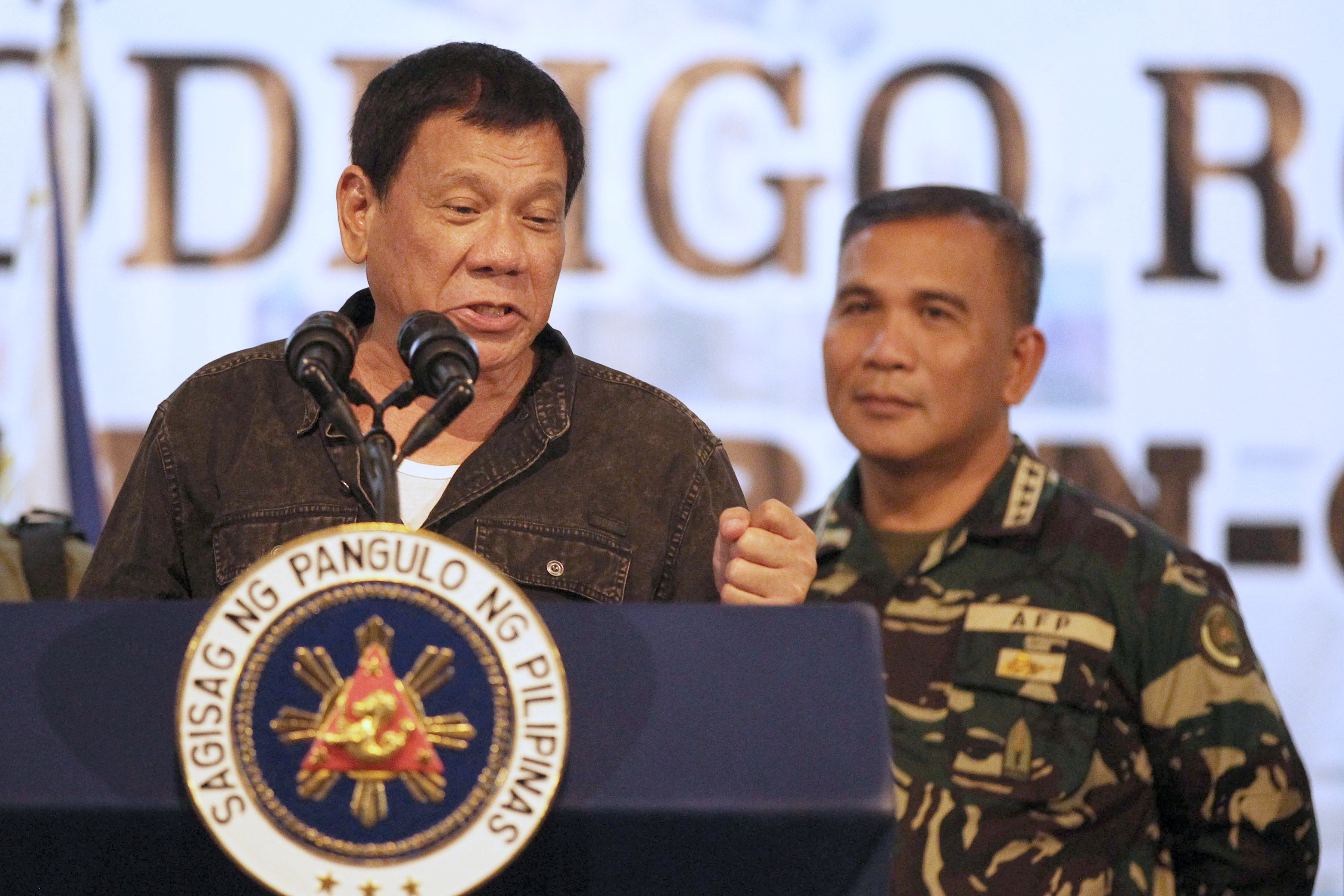 MANILA, Philippines – President Rodrigo Duterte took offense with Chief Justice Maria Lourdes Sereno’s letter, saying he did not appreciate being “ordered” around by the Supreme Court.

Duterte said, if Sereno does not appreciate his methods in purging the country of drugs, would she rather he declared martial law?

(If this continues, you try to stop me and all hell breaks loose, or would you rather I declare martial law? Filipinos are being killed. I grieve for so many women raped, men killed, infants raped, then you put me against a corner.)

He was speaking to troops in Camp Evangelista in Cagayan de Oro City.

His words were in response to Sereno’s letter in which she raised concern over the “premature public announcement” of names of judges allegedly with drug links. (READ: FULL TEXT: Sereno’s letter to President Duterte)

She told Duterte that she had advised judges not to surrender to the police unless presented with a warrant of arrest.

But Duterte seemed to think she was also asking him for a warrant of arrest for the “600,000” drug personalities who, he said, had surrendered to law enforcement agencies.

“Madam Chief Justice, you must be joking. Dalawa tayo abugado, kayong lahat sa Supreme Court (We are both lawyers, also all those in the Supreme Court). Do you know how long it would take government to secure a warrant of arrest?” he said.

To secure a warrant for hundreds of thousands of people “would take forever,” allowing them to continue with their trade or addiction.

“In the meantime, ‘yung bangag ano’ng gawin mo? (What will you do with those high on drugs?) Let them resume their criminal activities?” he said, adding that judges “are not the ones guarding the streets.”

Duterte also said Sereno did not get it when she pointed out that some of the judges in his list didn’t even handle drug cases.

He claimed that the judges referred the drug suspects they were protecting to judges with jurisdiction over their cases.

(As to the judges, he was not handling drug cases? Ma’am, you’re wrong, I thought to be there you must be seasoned? The way it goes is: “Friend, call your judge friend.”)

He told Sereno: “Do not force the issue. I respect your comments, but it is a rigmarole to me.”

He warned the Supreme Court that if they order him around, he would instruct the entire executie department not to “honor” the body, the highest court in the land.

“Do not create a crisis because I will order everybody in the executive department not to honor you. Ito prangkahan, kasi nakialam kayo (I’m being frank, because you meddled),” he said.

“Just because you are the Supreme Court, you order me? I will not follow you,” he added.

He repeated his promise to investigate mysterious killings and insisted he has ordered the military and police to save lives and not kill.

“I will order the military and the police to save lives. I’m not saying they should kill them. But in the meantime you’re projecting your theories there, there is crime on the streets,” said Duterte.

“The Supreme Court may review, in an appropriate proceeding filed by any citizen, the sufficiency of the factual basis of the proclamation of martial law or the suspension of the privilege of the writ or the extension thereof, and must promulgate its decision thereon within thirty days from its filing,” reads Article VIII, Section 18 of the Constitution.

The state of martial also “does not suspend the operation of the Constitution, nor supplant the functioning of the civil courts or the legislative assemblies, nor authorize the conferment of jurisdiction on military courts and agencies over civilians where civil courts are able to function, nor automatically suspend the privilege of the writ.”

Earlier that day, Duterte said he intends to write a letter to Sereno explaining his naming of public officials with suspected drug links is part of his duty as president. – Rappler.com