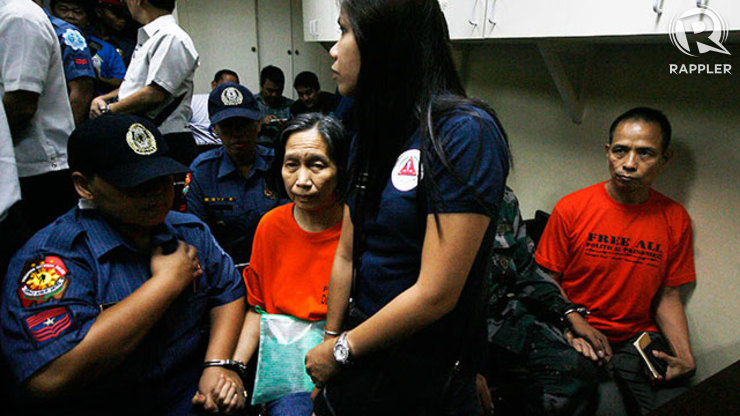 MANILA, Philippines (2nd UPDATE) – A Manila court on Friday, August 12, granted  bail to communist leaders Benito and Wilma Tiamzon so they can join the peace talks between the Philippine government and the National Government Front (NDF).

The peace negotiations will be held in Oslo, Norway, starting August 20.

The motion for bail granted by the Manila Regional Trial Court Branch 32 also covers detainee Adelberto Silva, who is also part of the peace process.

Manila RTC Branch 32 Presiding Judge Thelma Bunyi-Medina said the bail grant covers only the multiple murder case filed against them over the alleged 1985 purge of communist rebels in Leyte suspected of being military informants.

She said she had no jurisdiction over other cases against the NDF consultants pending before other courts.

The Tiamzons’ lawyer, Edre Olalia, agreed that his clients would have to seek the same clearance from the other courts where they face criminal charges.

In a motion filed on Thursday, lawyer Edre Olalia cited the importance of the Tiamzons and Silva in the formal peace negotiations between the Philippine government and the NDF.

Last week, the Supreme Court denied the Duterte administration’s plea to temporarily release the Tiamzons and several others detainees for the peace talks, saying it did not have jurisdiction over their cases, which are being tried by the lower courts.

The SC had advised Solicitor General Jose Calida to file the motion with a lower court.

The Tiamzons were arrested on March 22, 2014, for multiple murder and frustrated murder charges, among others.

“The couple occupies a strategic leadership role in the talks as high ranking leaders of the Communist Party of the Philippines and their participation ensures an inclusive outcome, hopefully to end conflict and bring about comprehensive and sustainable peace throughout the land as envisioned by President Duterte and his administration,” Dureza sai.

Earlier on Friday, NDF panel consultant Rafael Baylosis posted a P150,000-bail before the same court. Until the court appearance, Baylosis was in hiding because of charges in relation to a mass grave discovered by authorities in Inopacan, Leyte, in 2006.

“He surfaced because he was encouraged by the coming resumption of the peace negotiations and  he wanted to perform his role fully as a consultant,” Olalia said. – Rappler.com