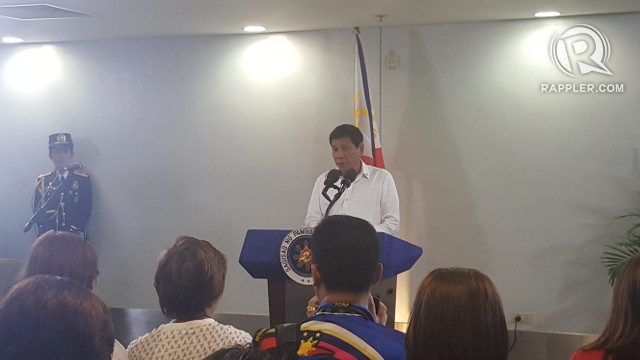 Facebook Twitter Copy URL
Copied
'If you quarrel with them now and you claim sovereignty, make noise here and there, they might not just want even to talk,' says Duterte about how China might react if he brings up the maritime dispute during the regional summit

MANILA, Philippines – President Rodrigo Duterte has no plans of bringing up the West Philippine Sea (South China Sea) dispute during the Association of Southeast Asian Nations (ASEAN) Summit to be held in Laos in September.

“No. I will only bring up the issue when we are together face to face,” he said during a press conference on Wednesday, August 17, at the Ninoy Aquino International Airport Terminal 3.

Duterte is set to attend the ASEAN Summit in early September, the first international summit he will be participating in as President.

The maritime dispute with China has been a topic of the summit in previous years as several ASEAN countries are pursuing claims over the body of water.

But Duterte said he did not want to make unnecessary “noise” that could endanger chances of bilateral talks with China.

“If you quarrel with them now and you claim sovereignty, make noise here and there, they might not just want even to talk,” he said.

The President said he prefers to “maintain good relations with China.”

“Let us create an environment where we can sit down and talk directly. Then that is the time I would say, ‘We proceeed from here. We proceed from this,'” said Duterte.

He thinks picking a fight through the ASEAN Summit may only complicate the already delicate situation between the two countries.

“Eh kung awayin ko ‘yan, sabihin nila ‘ayaw ko makipagaway, bahala kayo sa buhay ninyo,’ (If I argue with them, then they say, ‘I don’t want to fight, nevermind the talks.’), can we do anything? Wala na tayong magawa. (We can’t do anything.),” he said.

The ASEAN Summit next month comes after China said it would welcome Duterte’s envoy, former President Fidel Ramos, to Beijing. The Duterte administration is hoping it can begin formal bilateral talks with the Chinese government after the Philippines won a historic case against China over the West Philippine Sea.

Duterte refuses to “flaunt” this ruling as he aims to boost ties with Beijing for practical reasons, including China’s offer to build a railway in two years. – Rappler.com