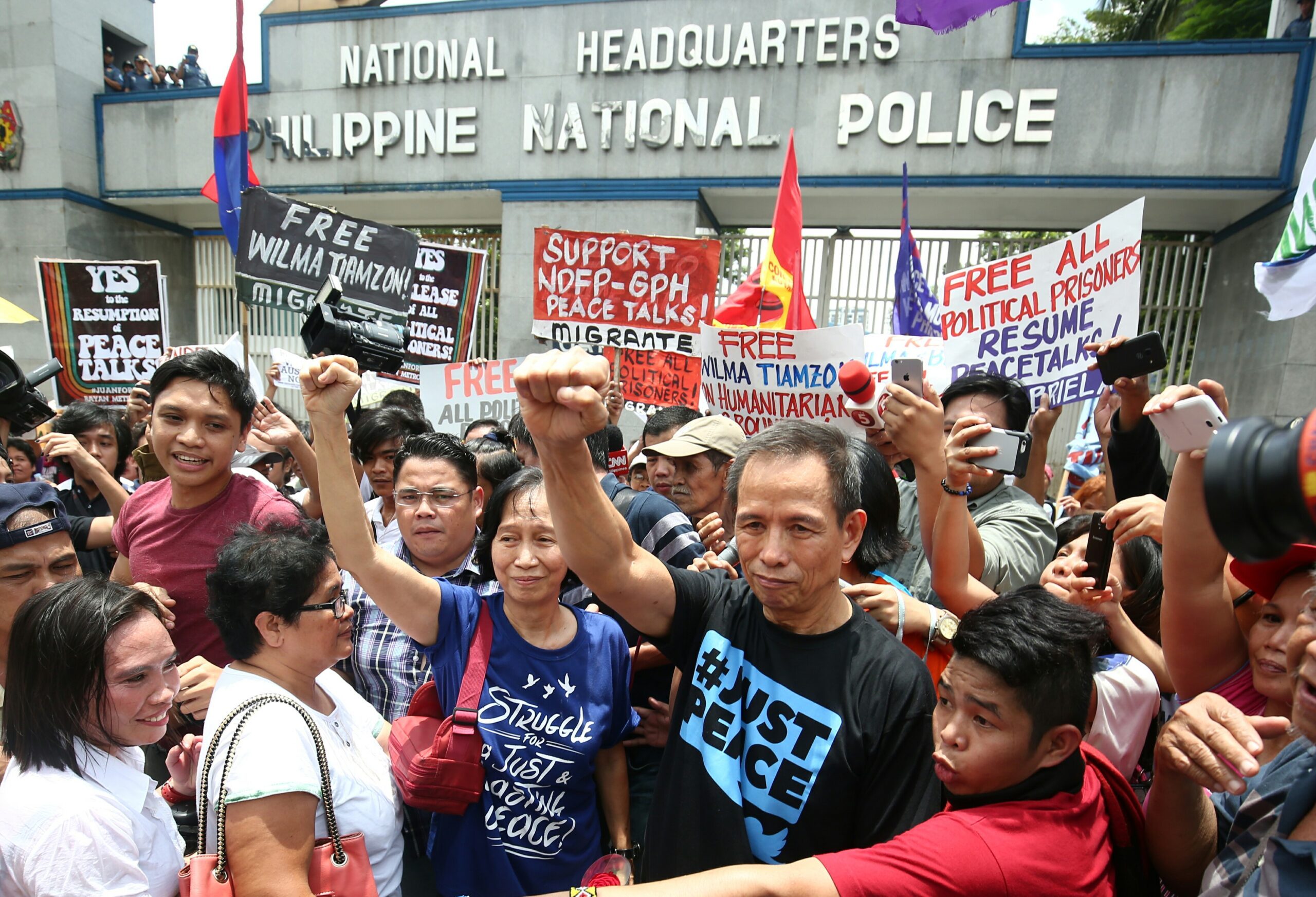 MANILA, Philippines – MANILA, Philippines – Fists up in the air and wearing shirts calling for “just and lasting peace,” Benito and Wilma Tiamzon were given temporary freedom on Friday, August 19, ahead of peace talks between the Philippine government and the National Democratic Front (NDF).

The Tiamzons, alleged top leaders of the Communist Party of the Philippines (CPP), were arrested in Cebu on March 22, 2014, over standing warrants of arrest for multiple crimes against humanity.

But the NDF has argued that the two are their consultants as covered by the Joint Agreement on Safety and Immunity Guarantees (JASIG), which guarantees them safe conduct as part of the peace talks between the government and the longest-running insurgency in Asia.

Past 11:30 am on Friday, the Tiamzons left the Philippine National Police (PNP) Custodial Center inside Camp Crame in Quezon City. They proceeded directly to Gate 2 of Camp Crame along Boni Serrano Avenue, where various cause-oriented groups were staging a rally to call for their immediate release.

“Labis kaming nagagalak na nakalaya kami gayun din ang ibang mga consultants at personnel ng NDF na protektado ng JASIG (We are overjoyed that we are free, as well as other consultants and personnel of the NDF under the JASIG),” said Benito Tiamzon in a quick message right after their release.

The couple will fly Oslo, Norway, as part of the working groups in the peace negotiations between the government and the NDF.

They also expressed optimism for the coming peace talks, one of President Rodrigo Duterte’s key campaign promises during the 2016 elections.

From Camp Crame, the couple headed to the Department of Foreign Affairs to process their passports.

Chief Peace Adviser Jesus Dureza earlier cited the key role of the Tiamzons in the negotiations as high ranking leaders of the Communist Party of the Philippines, saying this assures the “inclusive outcome” of the talks.

The peace negotiations will be held in Oslo, Norway, starting August 20. – Rappler.com