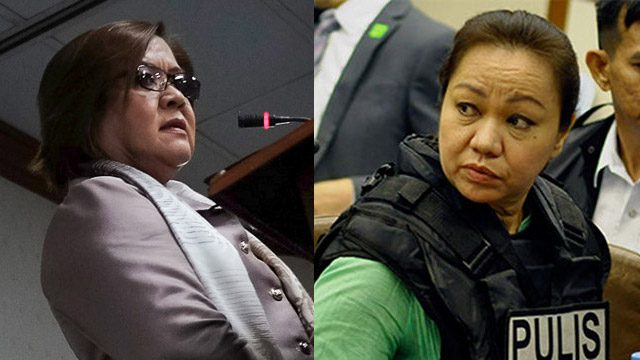 For De Lima, it’s a recycled issue. The senator questioned why the administration keeps on digging up past allegations, saying it is “too much” already.

(That’s a rehashed issue. That’s what I’m saying. Why are they digging and digging up the past? What does that mean? It’s too much.)

Saying she was the one who sought the imprisonment of Napoles, De Lima said the accusation against her is “too unfair.”

De Lima, then justice secretary, recommended the filing of plunder and tax charges against Napoles.

In late 2013, the justice department under De Lima initiated the filing of plunder charges against Napoles, 3 senators, and other public officials in connection with the pork barrel scam.

The opposition later accused the department and the Aquino government of “selective justice” as the investigation supposedly spared allies of then President Benigno Aquino III.

As for the alleged bank and phone conversation that Duterte has against her, De Lima maintained she has never been involved in illegal drugs.

The President earlier admitted that he learned of the alleged involvement of De Lima’s alleged driver-lover, Ronnie Dayan, in Bilibid drugs only through intercepts of a “friendly country” shared with the Philippine government, which are not admissible in court.

He did not divulge the foreign government, but said he asked permission to reveal it in public. Duterte also said that particular country “is also mad at De Lima because she’s involved in drugs.”

“Marahil iba diyan ‘di maniniwala, but later they would (know). ‘Tsaka ‘yung mga nakakakilala sa akin, they know I would never do that,” the senator said.

(Perhaps others do not believe me but later they would know. And those who know me, they know I would never do that.)

The House is set to conduct an inquiry into the proliferation of drug syndicates inside the New Bilibid Prison during De Lima’s term. – Rappler.com