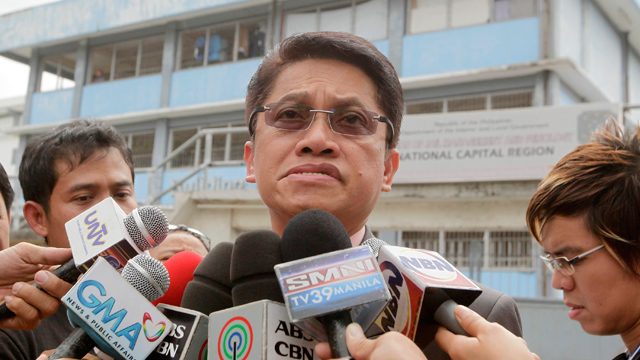 Facebook Twitter Copy URL
Copied
'I respect our President, but I am powerless before him. All I ask is fairness and due process, a chance to vindicate myself in a formal proceeding,' says former justice undersecretary Francisco Baraan III

Baraan said he will prove his innocence should a formal complaint be filed against him based on the allegation made by President Rodrigo Duterte.

“I respect our President, but I am powerless before him. All I ask is fairness and due process, a chance to vindicate myself in a formal proceeding. If a complaint will be filed, so then I will have the opportunity to present my side,” he said.

Baraan made the statement a day after Duterte said he had a “matrix” that showed the alleged links of Senator Leila de Lima and Baraan to drug lords serving time at the maximum security prison.

“All I can say now is that this is something I totally cannot imagine myself being involved in; it contradicts the deepest Christian values I hold dear. I know myself, and in due time the truth will prevail,” Baraan said.

He also clarified that said that when he was justice undersecretary, the Bureau of Corrections (BuCor) was just one of the Department of Justice agencies under his “limited” administrative supervision, and that he was not in charge of the NBP.

“As undersecretary having limited administrative supervision of BuCor as Bureau, I did never oversee, either on the ground or from a distance, the prison operations in BuCor’s 7 penal colonies, more so the New Bilibid Prison in Muntinlupa,” Baraan said.

Duterte’s matrix, which the President said he would release this week, supposedly shows the illegal drug trade operations within the NBP in Muntinlupa and the personalities involved.

The President had alleged that De Lima played a key role in the supposed “Muntinlupa Connection,” which the former justice secretary had categorically denied.

De Lima had repeatedly said that she was the one who had exposed drug use and the the existence of contraband items at the NBP when she conducted 30 surprise inspections at the prison when she led the DOJ. (READ: De Lima: I exposed drug use in Bilibid, why probe me?) – Rappler.com