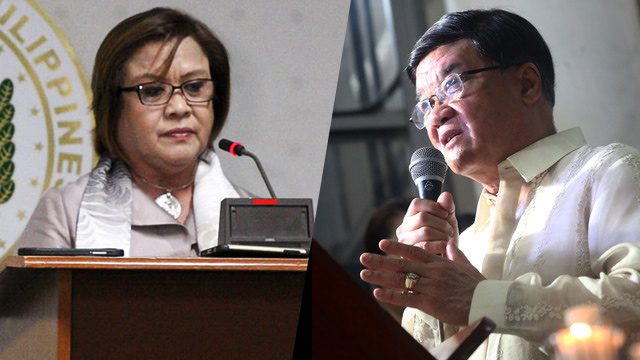 Aguirre disclosed the development in an interview with reporters on the sidelines of the EU-Philippines Justice Support Programme II Final Event at the Marco Polo Hotel in Ortigas.

He said one of the witnesses is a self-confessed bagman of a drug lord serving time at the NBP, while the rest are prison guards and persons said to be close to the former justice secretary.

Aguirre admitted that the testimonies provided by the witnesses only implied that De Lima could have benefited from the illegal drug trade inside the NBP.

“Because of the accusation that it was the driver collecting the money, people do not believe that he was doing it without the knowledge of the senator,” Aguirre said.

He said the Department of Justice’s investigation is not focused on “any particular individual” but all former DOJ officials from “the highest to the lowest.”

“As long as we could show that there is probable cause against them, we are going to file the necessary charges,” Aguirre said.

President Rodrigo Duterte had earlier accused De Lima of getting drug money through her former driver and boyfriend, Ronnie Dayan, who allegedly collected from drug lords at the national penitentiary.

De Lima categorically denied any involvement in illegal drugs, and said she was willing to get shot in front of Duterte if state investigators can produce any genuine evidence against her.

De Lima came under attack from the Duterte administration ahead of the Senate probe into alleged extrajudicial killings in the government’s war against drugs, which she is leading as chairperson of the Senate committee on justice and human rights.

Aside from the DOJ investigation, the House of Representatives plans to conduct an inquiry into drug use at the national penitentiary when De Lima was justice secretary. (READ: De Lima: I exposed drug use in Bilibid, why probe me?)

De Lima is also facing an ethics complaint at the Senate, filed by a lawyer, over her alleged drug links. – Rappler.com