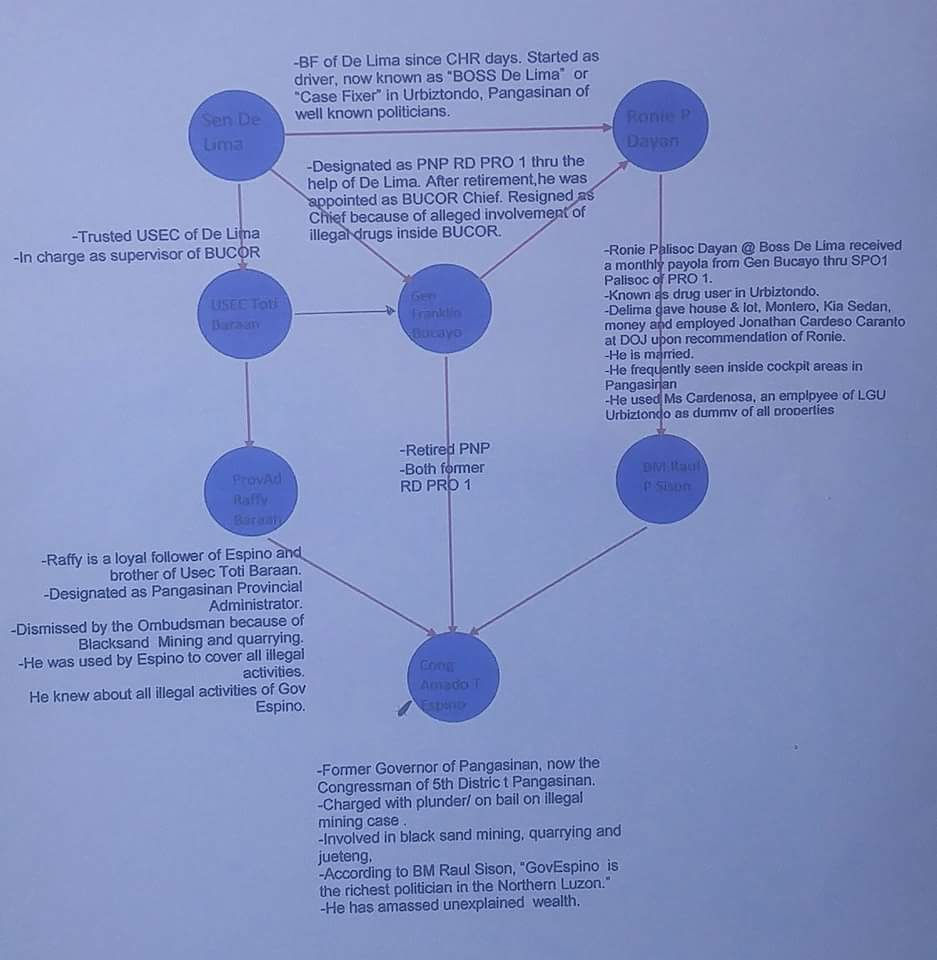 Espino, a Liberal Party ally, is tagged in the matrix as the “richest politician in Northern Luzon” who has “amassed unexplained wealth.”

It also links him to black sand mining, quarrying, and jueteng.

Baraan, his longtime aide and Pangasinan Provincial Administrator, was supposedly used by Espino as “cover” for all his illegal activities. Baraan is the brother of former Justice Undersecretary Francisco Baraan III who Duterte had previously disclosed is in the matrix.

Undersecretary Baraan is described as De Lima’s “trusted” undersecretary put in charge of the Bureau of Corrections which has jurisdiction over the New Bilibid Prison.

After his retirement, he became BuCor chief but resigned after being accused of involvement in the New Bilibid Prison illegal drug trade.

Arrows link De Lima and Bucayu to Dayan, who is described in the matrix as the “case fixer” of “well-known politicians” in Urbiztondo, Pangasinan.

Dayan supposedly received a “monthly payola” from Bucayu through a police officer with the surname Palisoc. Dayan’s mother’s maiden name is Palisoc.

Dayan is also allegedly a drug user. In the matrix, it says he received a house, lot, Montero, Kia Sedan, and cash from De Lima.

An Urbiztondo local government employee, “Ms Cardenosa,” serves as the dummy for his properties, claims the matrix.

Pangasinan District Board Member Raul Sison is also in the matrix with links to Dayan and Espino, but it is not clear how he is involved in the drug operations.

On Wednesday, Duterte said De Lima did not directly buy drugs but “facilitated” the drug trade within the national penitentiary.

De Lima has denied any involvement, saying she even authorized the raid that revealed the lavish lifestyles and drug operations of inmates. (READ: De Lima: I exposed drug use in Bilibid, why probe me?) – with a report from Editha Caduaya/Rappler.com