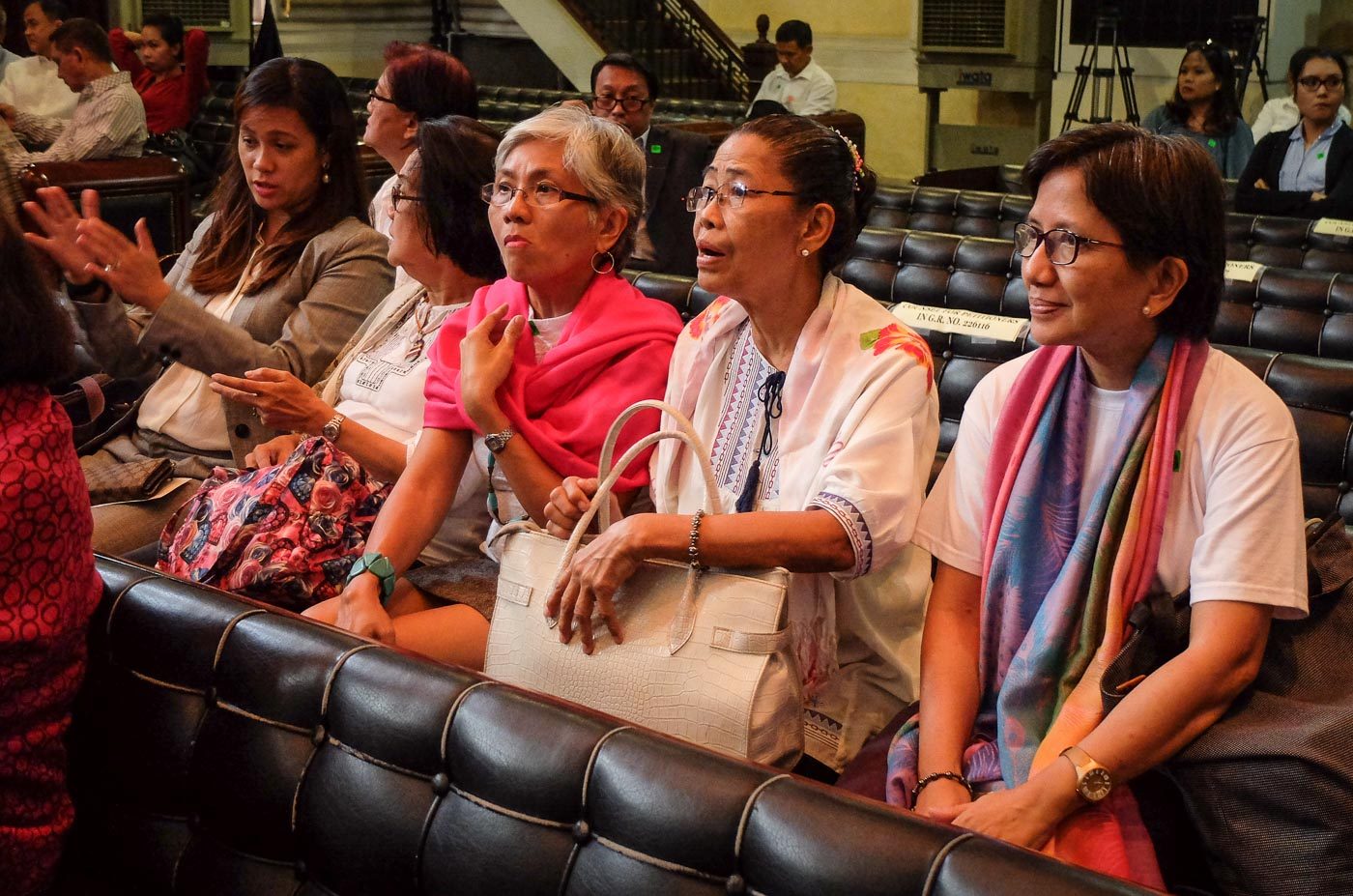 Etta Rosales, former chairperson of the Commission on Human Rights (CHR) who experienced the atrocities of the dictatorship, recounted: “They had a gun and they threatened me to answer the question, otherwise they [would] shoot [me].”

She was also raped, tortured, and went through electric shock and Russian roulette.

Rosales is among the petitioners asking the Supreme Court to stop the burial of the late dictator at the Libingan ng mga Bayani, which President Rodrigo Duterte had allowed supposedly for the country to be able to move on from that period of history.

Another petitioner in one of the cases, Trinidad Herrera, told the Chief Justice about her terrible experience under the dictatorship.

(They ordered me to remove my blouse and they applied electric shock on my breast. Electricity went through my body until I couldn’t take it anymore.)

“They even put water on the floor so that the electricity would enter my body,” she added in Filipino.

Another victim, Fe Mangahas, shared: “They would scare me again by touching me and breathing down my neck and then I felt something like naihi ako (I peed). I figured it was blood because at the time I did not realize I was two months pregnant.”

“When they found out I was pregnant I was released, but I was asked to report weekly about my whereabouts. I had to do this every Saturday for a year,” she added.

Other victims also detailed what they went through when they were captured by uniformed men.

Maria Christina Rodriguez said her captors burned her skin with cigarette. Her fingers were swollen because of bullet-pressing.

Maria Christina Bawagan said her thighs were hit until they looked like rotten vegetables. She was sexually abused, with her captors inserting objects into her vagina and touching her breasts while blindfolded. She said she may never know who exactly tortured her, but she clearly remembered their voice.

Each of these women remembered the exact date they were captured and went through the life-scarring experience.

Sereno asked the petitioners, who are claimants for compensation under Republic Act 10368 or the Human Rights Victims Reparations Act, to speak before the court. (READ: What the gov’t still owes Martial Law victims)

She told them, “The Court is listening.”

Not about the money

During her interpellation of former Akbayan Representative Ibarra Gutierrez III, lawyer for one of the petitioning groups, Sereno asked if the monetary compensation for the victims was not sufficient.

Gutierrez responded: “No, your Honor, because the law explicitly acknowledges to recognize the [victims and their heroism and sacrifices].”

He also said that money is not equivalent to the restoration of dignity of the victims.

The late strongman’s state burial, he said, would “prolong and extend” the suffering of the victims.

Human Rights Victims Claims Board (HRVCB) Chairperson Lina Sarmiento, who was one of the resource persons invited, said that out of over 75,000 claims, they have only finished processing 17,000.

HCRVB can only start distributing the compensation after every case has been settled because the P10 billion funds allotted will be divided according to the intensity of human rights violations experienced by each victim.

Sarmiento said they are hoping to finish the work before May 12, 2018, when their office expires.

Also appearing as a resource person, CHR Chairperson Chito Gascon said the state has an obligation for “non-repetition” of the trauma they experienced during Martial Law.

“There is a commitment on the part of the state [to] non-repetition, [that] the victims should not be exposed to re-traumatization,” he told Chief Justice Sereno.

Gascon stressed that local and international laws acknowledge reparations as a “positive act that the stake must undertake to [prevent] impunity.” – Rappler.com

Other stories from the SC oral arguments on the Marcos burial cases: