Sep 2, 2016 5:39 PM PHT
Marchel P. Espina
Facebook Twitter Copy URL
Copied
Police in Guihulngan City, Negros Oriental, say they did not see Althea Barbon with her father when they shot at the suspect as he attempted to flee on his motorcycle 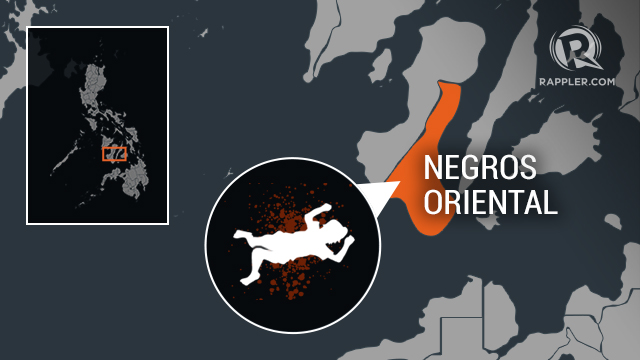 Althea Barbon died on Thursday, September 1, two days after her father, Aldrick Barbon, was killed when he resisted arrest during a drug buy-bust operation in Guhuilngan City.

Police say Barbon is ranked 5th among the top drug personalities of the city, and is in the drug watchlist of the provincial and regional police offices.

Police Superintendent D’Artagnan Katalbas Jr, Guihulngan City police chief, said the suspect sold a sachet of shabu to an undercover cop for P500 along the highway on Tuesday night.

After their transaction was completed, the suspect allegedly drew his gun when he sensed the presence of the police.

This prompted the police to shoot the suspect on his side to “paralyze” him so he could not fire back. “There was no intention to kill [the suspect],” Katalbas added.

The suspect sped away on his motorcyle. The police fired at him and hit him on the back.

“He was able to drive 75 meters away, then the motorcycle fell on its side,” Katalbas said.

Katalbas said it was only then that the police realized that Althea was with her father the whole time. She sustained gunshot wounds.

Both were rushed to the hospital, where the father was pronounced dead on Tuesday. Althea died on Thursday.

Katalbas said that the pursuing policemen, who were also on board a motorcycle, didn’t see the child because “they came from behind.”

He added that the operatives were “not able to ascertain that someone was with the suspect because it was dark and that the father overshadowed the girl.”

Katalbas concluded that the father used his daughter as “props” so the police would hesitate to intervene when he got caught in his illegal activities.

Recovered from the crime scene were a caliber .38 revolver with 5 live ammunition, 5 sachets of shabu, motorcycle with no registration, and the P500 marked money.

Katalbas said Barbon is allegedly involved in murder cases in the city, and that 3 of his brothers are in prison for drug charges.

He said they are investigating if the suspect belonged to the group of drug lord Jeffrey “Jaguar” Diaz, who was killed in a police operation in Las Piñas on June 18.

Katalbas said that Barbon got his drug supply from Cebu City and that he supplied the city and neighboring localities including Canlaon City, Vallehermoso, and La Libertad.

All in all, 2,446 people have died since the Duterte administration began its campaign against illegal drugs on July 1, according to the Philippine National Police, including family members of drug suspects.  (READ: Collateral damage: 5-yr-old girl latest fatality in war on drugs) – Rappler.com