Recent bomb threats in schools: ‘Are kids your enemies?’ 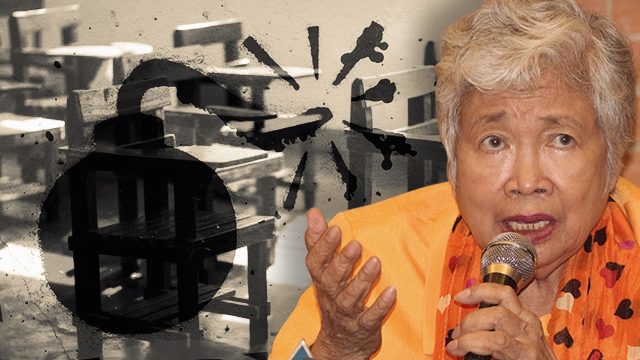 MANILA, Philippines – The recent string of bomb threats in schools nationwide following the Davao City blast has prompted the education department to reiterate its call for police visibility near schools.

(Because if you put your place in the mind of all those perpetrators, who are their enemies? Are children their enemies? Will they do that in schools where almost all are children except for the teacher? For me, bomb threats should be verified carefully. Is it true or not?)

Although the number of bomb threats in schools have increased recently, Briones said it is “quite unlikely” for perpetrators to target schools.

(They probably won’t target children, because these are young people. That’s what I think – if they want to communicate, if they want to gain public favor or support, bombing a school is not the best way to do it.)

Just the same, the Department of Education has instructed school officials to coordinate closely with local authorities to determine whether a bomb threat which causes “disruption of classes, panic, and unnecessary stress” is real or not.

Assistant Secretary Jesus Mateo reminded schools that not all bomb threats necessitate the suspension of classes.

(A bomb threat doesn’t mean there won’t be classes already. It has to be verified. Our schools must first get the opinion of authorities – in this case, the police, in coordination with local government units, because as Secretary Briones said, even before some schools a already get bomb threats, but the incidences have heightened.)

President Rodrigo Duterte declared a “state of lawlessness” in the country after the deadly blast at the Roxas Night Market in Davao City killed at least 14 and wounded more than 70. (For updates on the Davao blast, check Rappler’s live blog.)

The declaration simply means more soldiers and policemen will now be deployed, government will set up more checkpoints, and impose, if needed, curfew in certain areas. It is the mildest of the 3 commander-in-chief powers of the President granted by the Constitution.

“While such bomb scares turned out to be a hoax, we should not take these threats lightly, and authorities must remain on full alert and take extra precautions to ensure the safety of the students,” Angara said in a statement.

For instance, on Thursday, classes at the Philippine College of Criminology were cancelled due to a bomb threat that school officials received through calls.

Angara has filed Senate Bill 946 or the The Campus Safety and Security Act that seeks to establish a Crime Prevention Committee in all higher education institutions.

Under the proposed bill, the committee will formulate and implement crime prevention strategies and programs in relation to campus safety and campus law enforcement.

“Nakakabahala na isa sa mga pinupuntirya ng terorismo ay mga paaralan na kinaroroonan ng mga kabataan (It’s alarming that among the targets of terrorism is our schools where the youth are). Schools must be conducive to learning and intellectual discourse, not venues for violence and crime. Students should be able to go to school without fear for their physical well-being,” Angara said. – Rappler.com