Sep 13, 2016 4:51 PM PHT
Pia Ranada
Facebook Twitter Copy URL
Copied
‘It would have been a bad taste in the mouth to be talking about having a strong posture in drugs and here you are begging for something,’ says President Duterte 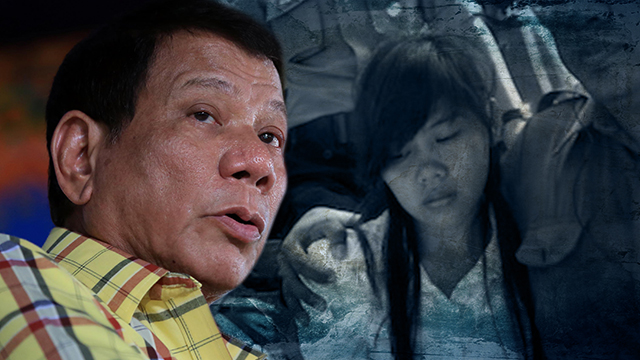 “Sinabi ko lang (I just said), ‘We will respect the judgement of your courts,’ period. It would have been a bad taste in the mouth to be talking about having a strong posture in drugs and here you are begging for something,” Duterte said  at the 48th anniversary of the Presidential Airlift Wing in Villamor Airbase.

Duterte made the statement a day after it was reported that Jokowi, in an interview with reporters in Indonesia, said Duterte had greenlighted the execution of Veloso, a mother of two convicted of drug trafficking in Indonesia, a crime punishable by death in that country.

Duterte was in Indonesia for a two-day working visit from September 8 to 9, after his participation at the Association of Southeast Asian Nations (ASEAN) Summit and related Summits in Laos.

But Duterte clarified that  his utterance of “go ahead” referred to his support for Indonesia’s death penalty and not to Veloso’s case specifically, although Veloso is also on death row.

“I said, ‘Mr President, so as not to apologize or anything – ‘It’s good you have the death penalty here. At least you can bring the problem to the barest minimum.’ I said, ‘Go ahead and implement the law.’ We never mentioned about Veloso,” said Duterte.

Duterte shifted from apologizing to rationalizing when he said he could not bring up Veloso’s case because of his drug war.

“I’m sorry – I have nothing to apologize [for] because the law is the law but then I have nothing to say sorry for – but the circumstances would not allow me to wander into another field of our talks,” he said.

His talks with Widodo included an agreement to jointly conduct maritime security against pirates and to combat terrorism. Before his trips to Laos and Indonesia, Duterte said he might plead for Veloso’s life.

Veloso, in a video message, asked Duterte to help her get “justice.” She is currently in a prison in Yogyakarta. The Indonesian government decided to spare her from execution due to a last minute plea by the Philippine government and the surrender of her recruiter.

Duterte had earlier said that he would plead for Veloso’s life when he met Jokowi on his working visit to Indonesia, but he had also said he was ready accept Indonesia’s decision either way. – Rappler.com