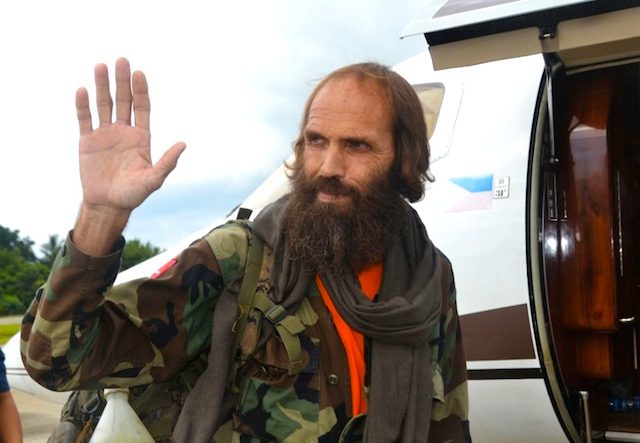 SULU, Philippines  (UPDATED) – A freed Norwegian hostage said he was “lucky to be alive” Sunday, after being kidnapped by Islamic militants and held in the southern Philippine jungle for more than a year.

Kjartan Sekkingstad appeared gaunt and frail as he was handed over to a government envoy along with 3 Indonesian seamen who had been held captive with him.

“I am so very happy and lucky to be alive,” Sekkingstad, heavily bearded and wearing a camouflage jacket, told reporters in the town of Indanan on Jolo island before being flown to meet the Philippine president in Davao City.

Sekkingstad was abducted from a high-end tourist resort he managed in September 2015 by notorious kidnappers-for-ransom the Abu Sayyaf.

Two Canadians taken hostage at the same time, John Ridsdel and Robert Hall, were later beheaded by the group after a ransom demand of about P300 million ($6.5 million) was not met.

Sekkingstad showed the media his backpack with his rubber slippers, plastic water jug and other items he used during confinement, saying that he would never lose these “souvenirs.”

The Abu Sayyaf freed the Norwegian on Friday, handing him over to another Muslim rebel leader, Nur Misuari, whose group assisted in the release and at whose camp he spent the night, according to the government.

Escorted by a small contingent of Jolo police on Sunday, Misuari, Philippine Chief Peace Adviser Jesus Dureza, the freed captives, and local officials met in a building surrounded by hundreds of Misuari’s fighters from the Moro National Liberation Front before leaving for a military camp.

Sekkingstad and Dureza were then transported to an airbase in Zamboanga City where a plane flew them out to the southern city of Davao for a meeting with Duterte.

The 3 freed Indonesians were taken to the nearby city of Zamboanga where Indonesian Defense Minister Ryamizard Ryacudu was waiting to pick them up and bring them back home to Jakarta.

It was still unclear if they were the same seamen kidnapped by armed men off a fishing trawler in Malaysian waters in July.

Sekkingstad  also narrated how he narrowly survived military attacks against his captors, with a bullet piercing his backpack. He said he was treated like a “slave” by the Abu Sayyaf.

“Basically, I’ve been treated like a slave, carrying their stuff around, time to time abused,” he said.

He added that during the separate killings of the Canadian hostages in April and June, the two handcuffed Canadians were escorted out of sight, “but still close enough that you could hear their cries when it happened.”

“It was devastating,” the visibly shaken Norwegian said.

At a press forum with Duterte later, a now-clean shaven Sekkingstad thanked the President and all those who helped obtain his freedom.

It was unclear if any ransom was paid and, if so, by whom.

Norwegian foreign affairs communications chief Frode Andersen told Agence France-Presse by phone that “the Norwegian government does not pay ransom in this case or any other case.”

“Now, if there is a third party like [Sekkingstad’s] family that paid, we do not know anything about that,” he told reporters.

However, a spokesman for the Abu Sayyaf was quoted in a local newspaper on Sunday as saying the group received P30 million (about $625,000) for the Norwegian.

Duterte himself had said in late August that P50 million was paid to secure the release of Sekkingstad.

The Abu Sayyaf is a loose network of militants formed in the 1990s with seed money from Osama bin Laden’s Al-Qaeda network.

It is based in remote Muslim-populated southern islands in the mainly Catholic Philippines, and has earned millions of dollars in ransom from kidnappings — often targeting foreigners.

While its leaders have in recent years pledged allegiance to the Islamic State group, analysts say the Abu Sayyaf is mainly focused on a lucrative kidnapping business rather than religious ideology.

The group, which is blamed for the worst terror attacks in Philippine history and is listed by the United States as a terrorist organisation, has been the target of a military operation since August. – Rappler.com