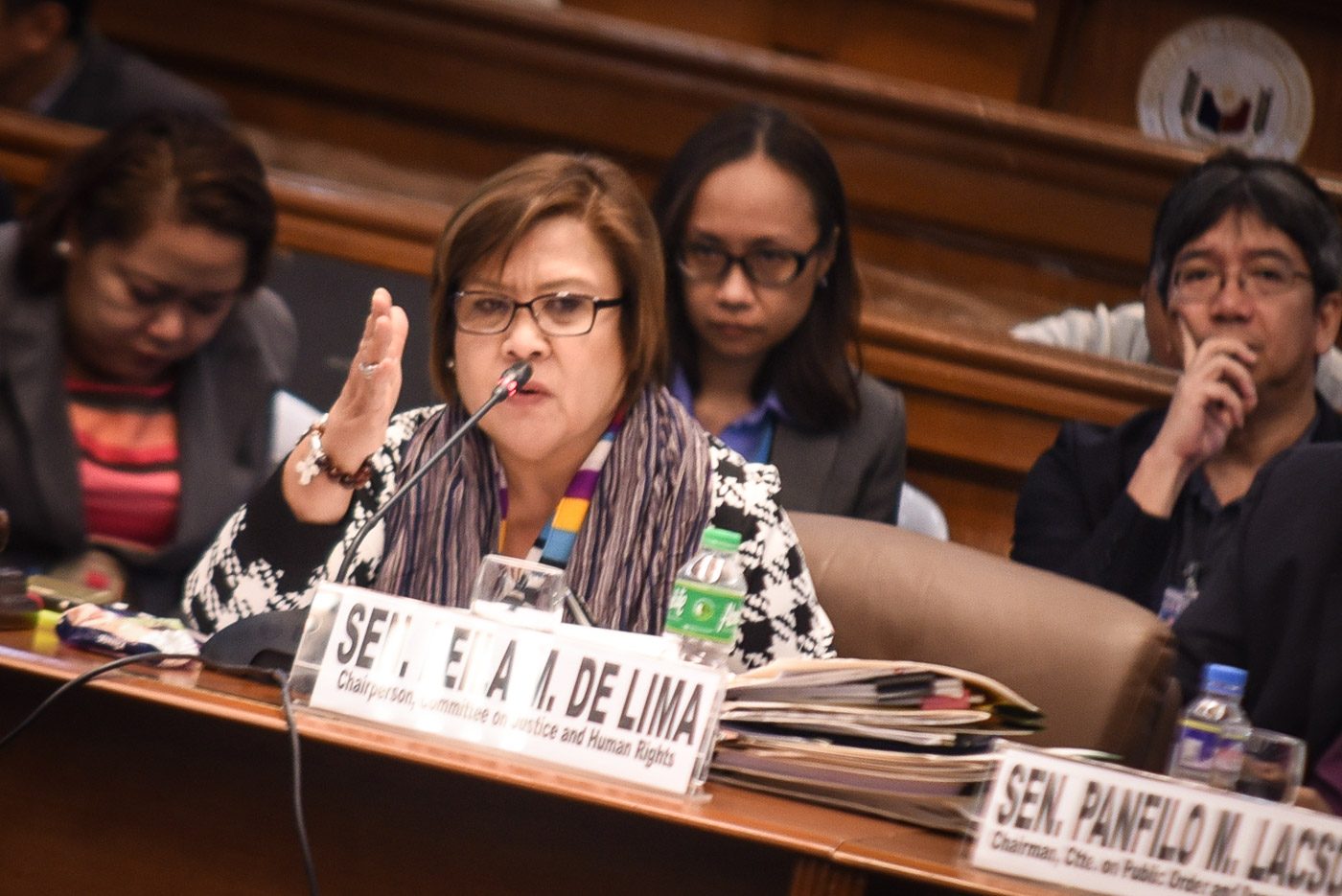 Facebook Twitter Copy URL
Copied
'I'm not at all recognizing that proceedings. It is a sham inquiry, with no objective other than to demolish or destroy me, upon orders of the President,' says Senator Leila De Lima

MANILA, Philippines – The House of Representatives should not expect any trace of neophyte Senator Leila De Lima at its probe into the proliferation of illegal drugs in the national penitentiary under the previous administration on Tuesday, September 20.

De Lima said on Sunday, September 18, that she would not attend the hearing with or without an invitation. She would not even send any representative or observer to what she called a  “sham inquiry,” she added.

“With or without an invitation, I will NOT attend that hearing. I will not even send any representative, lawyer or even an observer,” De Lima said in a text message.

De Lima said she is not recognizing the proceeding, which President Rodrigo Duterte’s House allies launched after the senator started an investigation into the spate of extrajudicial killings under the new administration. (READ: De Lima to Duterte administration: ‘Stop the killings now’)

“I’m not at all recognizing that proceedings. It is a sham inquiry, with no objective other than to demolish or destroy me, upon orders of the President,” she said.

Duterte had accused his fiercest critic of being linked to illegal drug trade in the New Bilibid Prison during her time as justice secretary. He also alleged that De Lima is in a relationship with her supposed married lover, who collects the money from drug lords on her behalf.

De Lima, for her part, has repeatedly denied such allegations. At one point, she said she was willing to be shot if such accusations would be proven true.

Justice Secretary Vitaliano Aguirre II had promised an “explosive” congressional inquiry, saying 14 witnesses, including high-profile convicts such as Herbert Colangco, are set to testify against the senator.

Colangco is serving time for kidnapping but allegedly continues to run illegal drug operations from the maximum security prison in Bilibid.

Aguirre had also said that one of the witnesses is a “ranking” government official.

But De Lima seemed unfazed by Aguirre’s announcement, saying it was no longer a surprise that the administration has resorted to “false or perjured” witnesses.

“That simply means nakakahuha na sila ng mga [they finally got some] false/perjured witnesses. I’m not surprised anymore since, as I said before, I was warned already about their evil design and insidious moves, such as fabrication of evidence,” she earlier told reporters.

“Pawang mga kasinungalingan yan! (Those are all lies!) That’s how evil and desperate they are,” she added. – Rappler.com