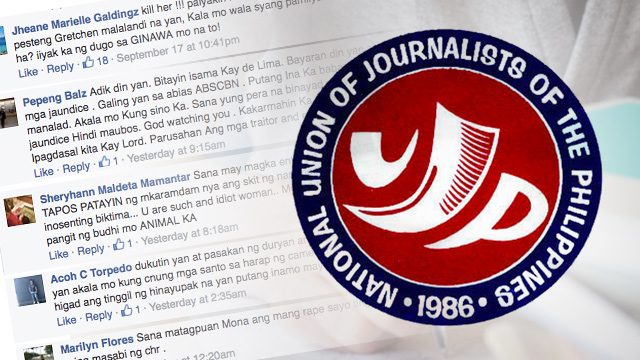 MANILA, Philippines (UPDATED) — The National Union of Journalists of the Philippines (NUJP) condemned recent attacks against two Philippine-based journalists on social media, and called on Malacañang to investigate threats under its presidential task force on media killings.

In a statement on Monday, September 19, the NUJP said the attacks against freelance journalist Gretchen Malalad and Al Jazeera correspondent Jamela Alindogan had “gone beyond legitimate criticism of their professional output to outright threats on their persons.”

The two have been the subject of personal threats over their reportage on President Rodrigo Duterte, particularly his intensified campaign against drugs.

NUJP encourages Palace Communications Secretary Martin Andanar to take action against threats thrown at journalists, specifically Malalad and Alindogan, in line with the creation of the presidential task force on media killings.

“This might be the perfect opportunity for the task force, or an equivalent mechanism currently available, to prove its worth,” the group said. “We call on Communications Secretary Martin Andanar to immediately cause an investigation and take action against the open threats against [Malalad and Alindogan-Caudron] and to do its utmost to ensure that none of these [threats] are carried out.”

On September 10, Duterte said that it is the sworn duty of media to ask questions. It is also their duty to their country to provide “true and accurate” reports, he added.

Open to criticism but not threats

NUJP said that although media is open to criticism, threats are uncalled for.

“The media, whether here or elsewhere, will always welcome engagement, including criticism, from their audience for this is also how we learn to be more effective communicators,” the group stated.

“However, we will never take any threats, whether of physical harm or to silence us, lightly for we have lost far too many of our colleagues and hardly seen justice for them.”

The duty of journalists is to “report events as faithfully” and blaming media on the consequences of the events covered is “tantamount to asking us to abrogate our duties and be silent.”

NUJP vowed to continue to push against efforts that threaten press freedom in the Philippines.

“We will continue to do so and to oppose any attempts to stifle press freedom, a freedom that, incidentally, does not belong to us but to the people, whose right to know that freedom serves,” the group said.

The International Federation of Journalist (IFJ) echoed the sentiments of NUJP, stating that threats against journalists on social media “must be taken seriously by the government.”

“This incident further demonstrates the need for the Malacañang to ensure the protection of journalists under the special task force,” the group said. “Threats delivered to journalists via social media must be taken seriously by the government and perpetrators must be penalised accordingly so as to ensure the safety of journalists.” – Rappler.com