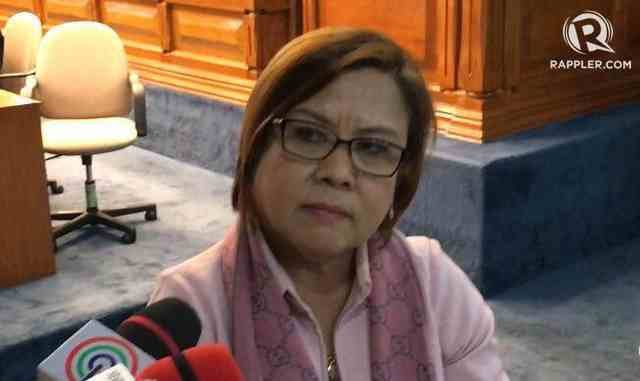 In his privilege speech, Cayetano – President Rodrigo Duterte’s former running mate and one of his staunchest allies in the Senate – accused De Lima of destroying the image of the Senate and the Philippines abroad.

De Lima said she left the hall “in protest” of Cayetano.

“I cannot stand it. I’m gonna deliver my own privilege speech tomorrow instead of confronting him now,” she told reporters..

(I stood up and left as a protest to the evil plans to silence me from continuing to look for the truth amid drug-related killings.)

Asked for her comment on tarnishing the country’s image abroad because of the Senate probe into extrajudicial killings, De Lima said: “What’s destroying the reputation of the country are the killings not me,” said De Lima, chairperson of the Senate committee on justice and human rights which is leading a Senate inquiry on alleged extrajudicial killings under the government’s anti-drug campaign.

(What destroys the country’s image is the continuous killings. This worsens because of the acts and words of our high-level officials who seemingly encourage disregard for human rights in the fight against illegal drugs.)

It was De Lima who last week presented an alleged former member of the Davao Death Squad who tagged Duterte and his son Paolo as among those who ordered killings in Davao City.

As of posting time, the senators were still in caucus to discuss the matter. – Rappler.com