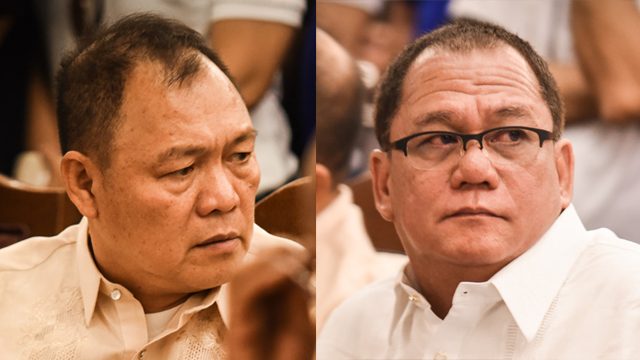 MANILA, Philippines – A former Bureau of Corrections (BuCor) official testified before a House committee that he personally delivered millions of pesos in drug money to the residence of Senator Leila de Lima when she was still justice secretary.

Former BuCor officer-in-charge Rafael Ragos made the revelation on Tuesday, September 20, the first day of the House probe into the alleged proliferation of illegal drugs  inside the New Bilibid Prison (NBP) when De Lima headed the justice department

Ragos, currently director III at the National Bureau of Investigation (NBI), was assigned to BuCor in November 2012.

In his affidavit submitted ahead of the hearing, Ragos said he saw a black handbag with a “huge” sum of money on his bed at the BuCor Director’s Quarters on November 24, 2012.

He said he received a call ordering him to deliver the handbag to Ronnie Dayan, De Lima’s driver and bodyguard with whom President Rodrigo Duterte said she was having an illicit affair.

Duterte had claimed that Dayan was De Lima’s bagman, which the neophyte senator had categorically denied.

“The caller said the black handbag came from Peter Co and it contains ‘5 manok’ which means P5 million as ‘manok’ refers to P1 million in the vernacular in the New Bilibid Prison,” said Ragos.

Manok is the Filipino word for chicken.

Peter Co is a convicted drug lord believed to be continuing his drug operations inside the national penitentiary.

Ragos then said he asked NBI intelligence agent I Jovencio Ablen Jr to accompany him to De Lima’s residence in Parañaque City.

In a separate affidavit, Ablen said he was assigned to help investigate the grenade explosion incident at the maximum security compound at the NBP on November 16, 2012, which allowed him to closely work with Ragos.

On the day of the first delivery, Ablen said Ragos called him to accompany him on a “very important task.”

“He then told me that we will deliver something to then Secretary of Justice, Senator Leila De Lima. He continued and said, ‘Nior, confidential ‘to. Tayong dalawa lang ang nakakaalam nito. Dadalhin natin ‘yung quota kay Lola. 5M ‘yang nasa bag. Tingnan mo (This is confidential. Only the two of us know about this. We will bring the quota to Grandmother. There’s P5 million in the bag. Take a look),” said Ablen.

Upon arriving at De Lima’s residence, Ragos said he handed the bag to Dayan at the gate.

“We then proceeded to the main door of the house where Sen De Lima was waiting for us. At the main door, Mr Dayan handed the black handbag to Sen De Lima, who received the same. We then entered the house,”narrated Ragos.

The two also said they made a second delivery in mid-December 2012. This time, the money supposedly from Co was placed in a translucent plastic bag.

“That time, I saw a plastic bag in front of my feet [inside the car]. I asked Dep Dir Ragos, ‘Quota na naman (again), sir?’ Dep Dir Ragos replied, ‘Ano pa nga ba? Tangina, sila lang meron (What else? Son of a bitch, they’re the only ones making money),’” said Ablen.

Like in the reported November delivery, the two NBI officers only stayed inside De Lima’s house a few minutes after making the delivery before returning to BuCor.

Ragos and Ablen are among the 6 witnesses who were to testify before the House panel that day. They were all granted immunity from suit involving their testimonies. – Rappler.com