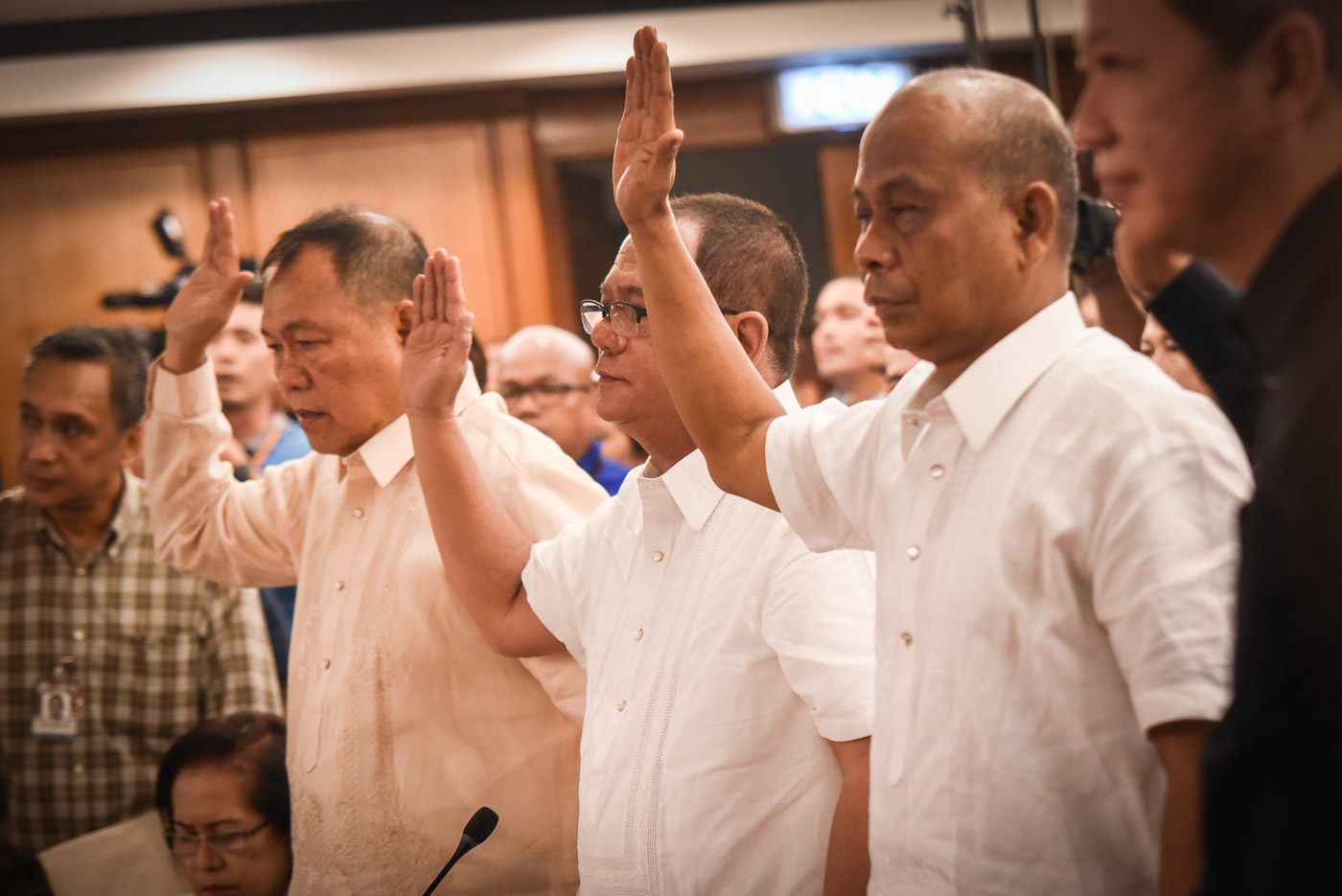 MANILA, Philippines – Justice Secretary Vitaliano Aguirre II and the 4 witnesses during the House probe on the drug use inside the New Bilibid Prison (NBP) agreed that Senator Leila de Lima was a “coddler” of some influential inmates during her stint as justice secretary.

Aguirre presented the following witnesses before the House committee on justice Tuesday, September 20:

They, along with NBP inmates Noel Martinez and Jaime Patcho, were granted immunity from suit in relation to their testimonies by Speaker Pantaleon Alvarez. This was done upon the motion of the justice secretary himself.

During the House panel members’ interpellation period, Compostela Valley 2nd District Representative Ruwel Peter Gonzaga asked Aguirre and every witness this question: “Do you consider then secretary of the Department of Justice (DOJ) De Lima as a protector, coddler of Peter Co, Herbert Colanggo, and Jaybee Sebastian?”

Co, Colanggo, and Sebastian are among the high-profile inmates at the NBP who allegedly got special favors from De Lima. (IN PHOTOS: Drug lords, murderers, and high living in Bilibid)

Both Ragos and Magleo replied “Yes” while Ablen said “I believe so, your honor.”

Aguirre, for his part, said the affidavits executed by the witnesses make him believe that De Lima protected some convicts who continued their drug operations inside the NBP.

For the first 7 hours, Aguirre posed questions to the witnesses ahead of the interpellation period of House committee on justice members. Majority Leader Rodolfo Fariñas said this did not violate any rules of the House of Representatives.

De Lima was a no-show during the 10-hour hearing, which she said is part of President Rodrigo Duterte’s plan to destroy her name. She said she had received almost 2,000 hate messages as of 8 pm Tuesday after Colanggo made public her mobile phone number during the committee hearing.

The fierce critic of Duterte also belittled the congressional probe for having drug convicts, criminals, and government officials who were hiding something as key witnesses. (READ: De Lima: Witnesses in House probe ‘pressured, tortured’)

Aguirre denied that Duterte influenced the House investigation. The President said on Tuesday, however, that the probe is a vindication of his earlier claims linking De Lima to illegal drugs.

But he said the DOJ is already eyeing filing charges against De Lima for possible violations of the Comprehensive Dangerous Drugs Act of 2002 and the Revised Penal Code.

The House committee on justice, chaired by Oriental Mindoro 2nd District Representative Reynaldo Umali, will continue the investigation at 9:30 am on Wednesday, September 21. – Rappler.com