Facebook Twitter Copy URL
Copied
In the same speech, Duterte tells soldiers he will never order them to do anything illegal

MANILA, Philippines – President Rodrigo Duterte reminded Philippine soldiers that no matter how many criminals they kill in the line of duty, he will pardon them and even give them a promotion.

“For as long as there is the power to pardon sa Constitution, ‘yan ang weapon ko (that’s my weapon) against crime. Mag-massacre kayo ng isang daan, isang daan din kayo, eh di pardon lahat kayo (Massacre 100 people, I’ll pardon all of you) – restore to full political and civil rights plus a promotion to boot,” said Duterte on Tuesday, September 20.

He was speaking to soldiers of the 10th Infantry Division in a military camp in Mawab, Compostela Valley. (READ: Why has Duterte visited 14 military camps in less than a month?)

“Itaga ninyo ito sa puso ninyo (Carve this into your hearts): For as long as I am the president, nobody but nobody – no military man or policeman will go to prison because they performed their duties,” he emphasized.

Duterte instructed soldiers to kill criminals whether or not they pull out a gun. Previously, he had said to shoot criminals only if they violently resist arrest.

(If they pull out a gun, kill them. If they don’t, kill them, son of a whore so it’s over, lest you lose the gun. I’ll take care of you.)

But Duterte later on said he would never order the military to do something illegal.

“Hindi ako mag-order ng illegal. ‘Wag kayong maniwala diyan. (I won’t order anything illegal. Don’t believe that.) I did not order you and the police to perform punitive police action. I have declared war against the drug syndicates in this country. You know what is war. War is war,” said the President.

Duterte’s colorful threats against criminals have led critics, including international bodies like the United Nations and the European Parliament, to raise concern over what the Philippine government’s policy is when it comes to extrajudicial killings. 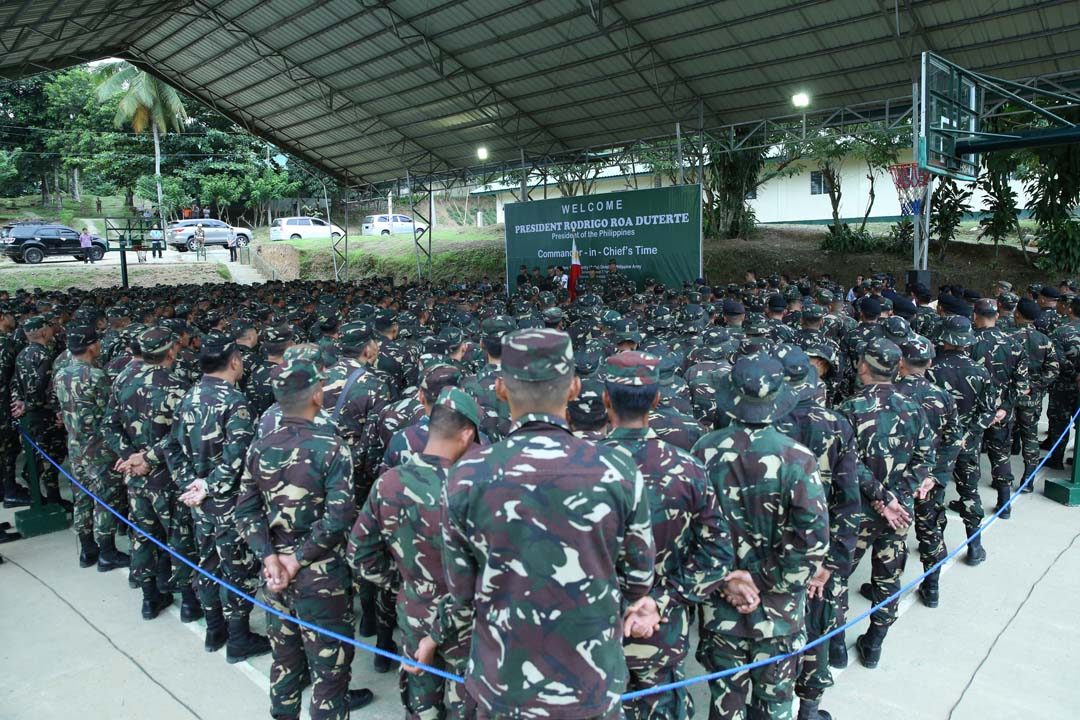 As early as the 2016 campaign season, Duterte had already said he would pardon military and police officers if they are charged for deaths that occur as they perform their duty.

Asked to comment on Duterte’s conflicting messages to soldiers and police, Presidential Spokesman Ernesto Abella said on September 15 that Duterte’s messages are “layered.”

He also said that despite Duterte’s verbal threats, “There is no written order that states that. What is stated is that they can shoot in order to protect themselves.”

The Palace has clarified that extrajudicial killings are not sanctioned by the Duterte administration.

Duterte’s war on drugs has killed at least 3,295 people since July 1, a day after he took office. Of this number, 1,167 have been killed in legitimate police operations as of September 20.

Meanwhile, 2,128 have been slain in extrajudicial or vigilante-style killings as of September 18. – Rappler.com