For fear of life, De Lima moves to temporary home 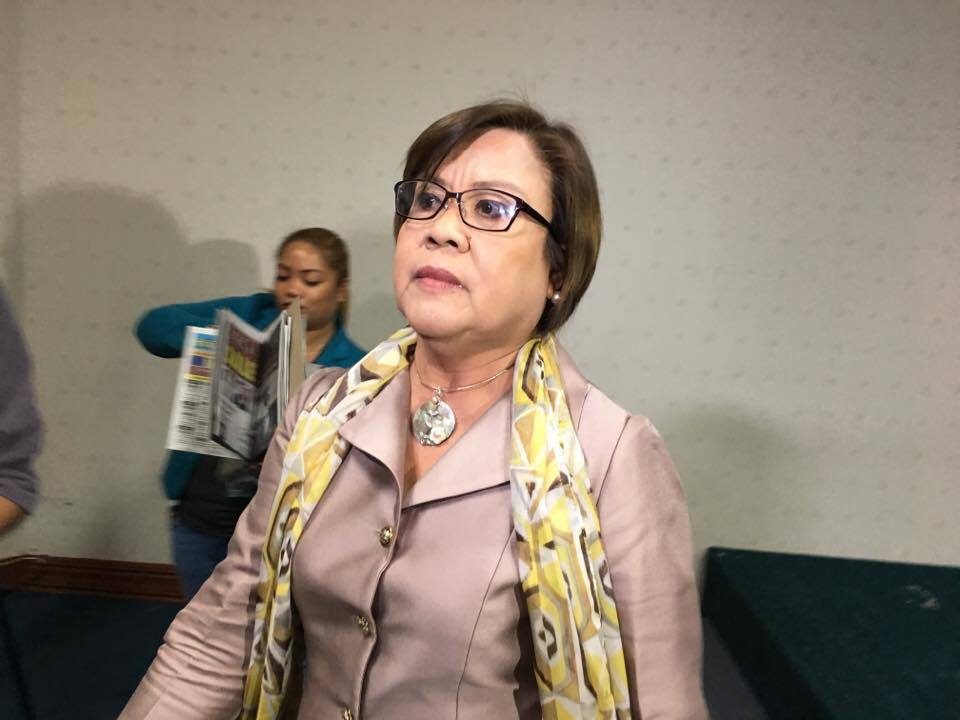 MANILA, Philippines – After her address was publicized by the House of Representatives, Senator Leila De Lima has left her home in the metro to live in a temporary residence.

De Lima said she is considering filing cases against her critics for supposedly violating her rights to security and privacy.

“I have to temporarily leave my house and I am now in a temporary place of abode,” De Lima told reporters in a press conference on Thursday, September 22.

The embattled senator said she had to leave for fear of her security and the other residents in the neighborhood.

On Tuesday, the House committee on justice revealed De Lima’s personal mobile number and residential address during the probe into her alleged role in the proliferation of illegal drugs at the New Bilibid Prison.

The senator earlier said she has received thousands of threats through text messages and calls, which she reiterated at the Thursday news briefing.

With all these, De Lima said she is contemplating seeking a writ of amparo and a writ of habeas data against her critics.

The petition for a writ of amparo is a “remedy available to any person whose right to life, liberty and security is violated or threatened with violation by an unlawful act or omission.”

The writ of habeas data, meanwhile, is a remedy for a person “whose right to privacy in life, liberty or security is violated or threatened by an unlawful act or omission such as gathering, collecting or storing of data or information regarding the person, family, home and correspondence of the aggrieved party.”

She said, however, that she does not have the luxury of time to deliberately think of her next steps.

“Sa dami lagi ng nangyayari ngayon, itong ginagawa sa akin araw-araw. (So many things are happening, what’s being done to me daily.) I hardly have time and energy anymore to be thinking about myself and next moves. But certainly mulling over several legal actions – writ of amparo and habeas data,” De Lima  said.

De Lima said she feels unsafe with the incessant attacks of administration allies against her. She lamented how she could no longer trust law enforcement authorities to secure her.

“So what is my choice? They’re violating my rights, right to security, right to privacy,” she said.

Despite the pressures against her, De Lima maintained she would not back down and rejected calls for her to resign.

(Should I? I’m the one being put in a tight squeeze because of their baseless accusations and then I will be the one to resign? I don’t want to speak further, I might say something that would fuel the anger of those people.)

De Lima was ousted as chairperson of the Senate committee on justice and human rights after she presented witness Edgar Matobato, a self-confessed hitman of the Davao Death Squad, who accused President Rodrigo Duterte of ordering killings when he was Davao City mayor.

Human Rights Watch had earlier called out the conduct of the House inquiry into the alleged proliferation of drugs at the New Bilibid Prison, saying it violated the “privacy and rights of a sitting legislator.”

“Human Rights Watch is deeply concerned about the implications to the security and safety of Senator de Lima posed by the public disclosure of her personal contact information and home address,” said HRW deputy Asia director Phelim Kine. – Rappler.com