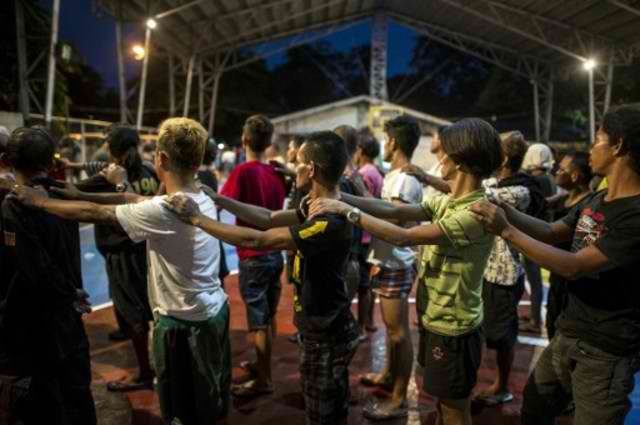 Reyes disclosed this during the House committee on dangerous drugs’ first hearing on Thursday, September 22, about the bills seeking to create more drug rehabilitation centers in the country.

“The World Health Organization observed that we were heavily into in-patient treatment and drug rehab programs. What we would require would be more out-patient and community-based interventions. The rationale being if we can prevent these drug dependents from progressing into their addiction, we would not require as many in-patient programs,” said Reyes.

As of September 22, a total of 717,487 drug users and pushers have surrendered to authorities.

According to Reyes, the 45 existing drug rehabilitation centers in the country cannot accommodate all of them given the limited 5,000 to 7,000-person capacity. (LIST: Where are drug treatment and rehab centers in the Philippines?)

Citing the 2015 United Nations World Drug Report, Reyes told lawmakers that only 0.6% to 1% of those who surrendered would require in-patient care. The other 99% would only need a “structured” community-based program. (READ: War on drugs: Rehabilitation must be more than a knee-jerk reaction)

“As a suggestion, Mr chairman, maybe we should look for more resources for community-based and out-patient programs,” said Reyes.

President Rodrigo Duterte’s war against crime and illegal drugs has caused a spate of drug-related killings as well as an increase in the number of drug personalities voluntarily surrendering to the police. (READ: IN NUMBERS: The Philippines’ ‘war on drugs’)

One of the strategies being studied is tapping into community activities to help rehabilitate recovering drug dependents, which includes involving faith-based institutions, religious organizations, and families to aid drug users in their respective communities.

The government is eyeing a P4.1-billion budget for 2017 for this rehabilitation program.

But Department of Health Assistant Secretary Elmer Punzalan pointed out that Section 75 of the Comprehensive Dangerous Drugs Act of 2002 already mandates the creation of drug rehabilitation centers per province, but “depending on the availability of funds.”

“There was an influx of the number of drug surrenderees that really magnified the need for these drug rehab centers,” said Punzalan, noting that there are still 4 provinces without drug rehabilitation centers.

He noted that for a 100-bed drug rehabilitation center, P144 million would be needed for construction and P51 million for personnel services.

For Punzalan, putting up drug rehabilitation centers per region would be a cheaper alternative for the government.

“We agree that there should be at least one major in-patient drug rehabilitation per region,” he said.

The Department of Health is proposing a budget of P94.046 billion in 2017. The figure includes P3.08 billion allotted for the operations of dangerous drug abuse treatment, a 1,050% increase from the funds allotted in 2016.

Health Secretary Paulyn Ubial recently went to China and signed a memorandum of understanding for the construction of a 10,000-bed mega treatment and rehabilitation center in the country. – Rappler.com