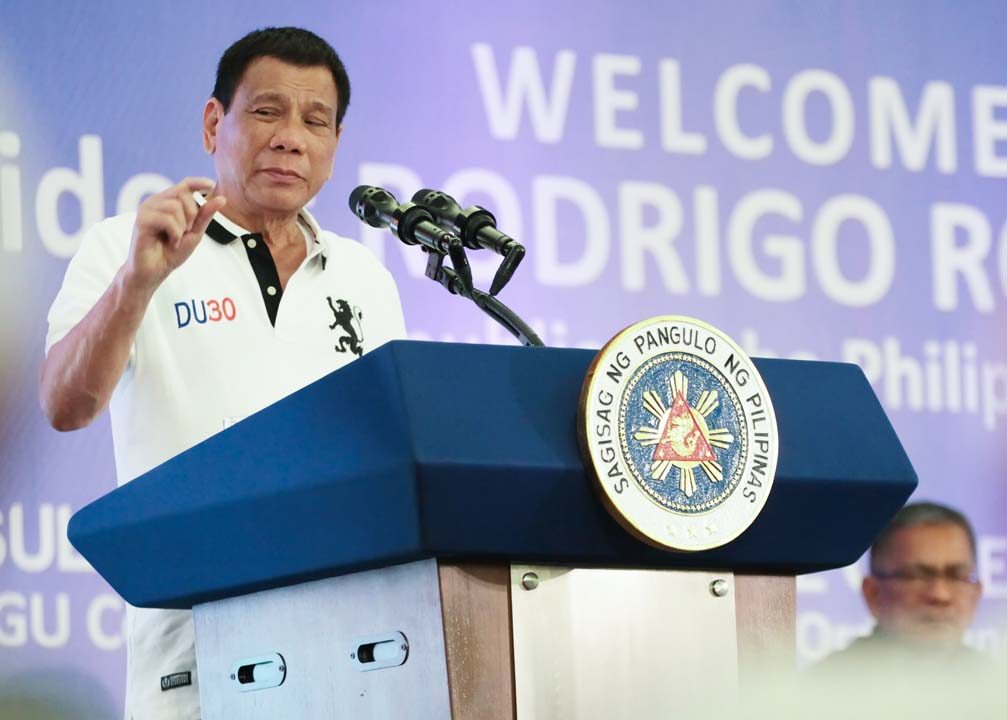 Facebook Twitter Copy URL
Copied
(3rd UPDATE) Among those invited is UN Secretary-General Ban Ki-moon. But Duterte has one condition: that he be allowed to ask the officials his own questions in an open forum.

“I am inviting the United Nations, si Ban Ki – hindi ko alam ang pangalan ng yawang ‘yan, Ban Ki-moon, Ban Ki-sun – I am inviting the EU, send the best lawyer of your town pati ang mga rapporteurs, pumunta sila sa Pilipinas. I will write them a letter to invite them to an investigation,” said Duterte on Thursday, September 22.

(I am inviting the United Nations, Ban Ki – I don’t know the name of that fool, Ban Ki-moon, Ban Ki-sun – I am inviting the EU, send the best lawyer of your town and even the rapporteurs, go to the Philippines. I will write them a letter to invite them to an investigation.)

The President was speaking at the inauguration of a power plant in Misamis Oriental.

In a speech later that day, Duterte said he has already ordered Executive Secretary Salvador Medialdea to write a letter of invitation to the UN and EU officials.

Duterte’s invitation, however, comes with one condition.

“But in keeping with the time-honored principle of the right to be heard, matapos nila ako tanungin, tanungin ko sila (after they ask me questions, I will ask them questions). In an open forum, you can use the Senate or the arts center. Everybody will be invited,” said Duterte.

Duterte already knows his first question to the foreign officials.

“Una kong tanong sa rapporteur (My first question to the rapporteur), ‘I killed thousands? What was the name of the first victim? What happened? Where, for what reason, how was it done? What time was it?'” he said.

The President had made the same condition when he challenged UN special rapporteur on summary executions Agnes Callamard to a public debate in August.

The European Parliament also issued a statement calling on the Duterte administration to “put an end” to extrajudicial killings.

Duterte has reacted negatively to these criticisms, threatening to pull the Philippines out of the UN and saying “fuck you” to the European Parliament.

The President expressed his dismay with these international bodies again in his Thursday speech.

(That’s why I cursed. You’d think, with all their pontification – if they are learned, so we are disrespected? Why is it like that?)

Duterte has previously said he does not appreciate being lectured, preferring that criticism against him be lodged with the UN which would then reach out to his office. – Rappler.com