MANILA, Philippines – Senator Alan Peter Cayetano on Thursday, September 22, grilled self-confessed “Davao Death Squad” hitman Edgar Matobato over apparent inconsistencies made in his claims over his education, targets they killed, and his affiliation before joining the vigilante group.

Matobato is among the witnesses in what was initially a Senate probe into the rise of killings in the context of President Rodrigo Duterte’s ongoing “war on drugs.”

On September 15, the Senate committee on justice and human rights led then by Senator Leila de Lima, featured Matobato as a key witness. Matobato claimed that President Rodrigo Duterte, who was longtime mayor of Davao City, formed the infamous Davao Death Squad.

But upon cross-examination by Cayetano, one of Duterte’s strongest allies in the Senate, Matobato gave conflicting answers.

Cayetano began by asking Matobato about the alleged murder of a certain “Salik Makdum,” a supposed “terrorist.” Matobato had earlier highlighted Makdum as one of their targets as members of the DDS.

The senator said Matobato made it seem as though Duterte ordered Makdum killed. On Thursday, Matobato said it was “Arthur Lascañas” who said Makdum would be their target.

In his previous appearance before the Senate, Matobato had claimed that orders to kill would either come from Duterte himself or from his trusted aides, Lascañas included.

Matobato initially said he was unsure if Duterte himself ordered the killing of Makdum but later relented, saying that in the case of the supposed “terrorist,” the former Davao City mayor was not involved.

The details of Makdum’s death apparently also changed, as Matobato was grilled by Cayetano. In his affidavit, Matobato said they stabbed Makdum. During the September 15 hearing, he said the victim’s throat was slit. On Thursday, he said Makdum was strangled.

Matobato clarified later on that it was Lascañas who stabbed and later, chopped Makdum up. Matobato said he only strangled the supposed terrorist.

Matobato also made conflicting statements over the existence – or lack thereof – of an affidavit he executed. He first claimed he had never executed an affidavit but the National Bureau of Investigation (NBI), which had scrutinized Matobato for admission into the government’s Witness Protection Program (WPP), said he did.

It turns out Matobato did execute an affidavit – apparently without the help of a lawyer – on his supposed torture at the hands of his colleagues at the DDS. The affidavit, which was read out loud by Cayetano, appeared to be written in English. Matobato, in his testimonies, has been speaking in either Filipino or his native Bisaya.

De Lima and Senator Antonio Trillanes IV both tried to explain in behalf of Matobato. De Lima called on fellow legislators to give Matobato “some consideration.”

Pacquiao, a member of the majority, spoke in a mix of Bisaya and Filipino in confronting Matobato over his inconsistencies. 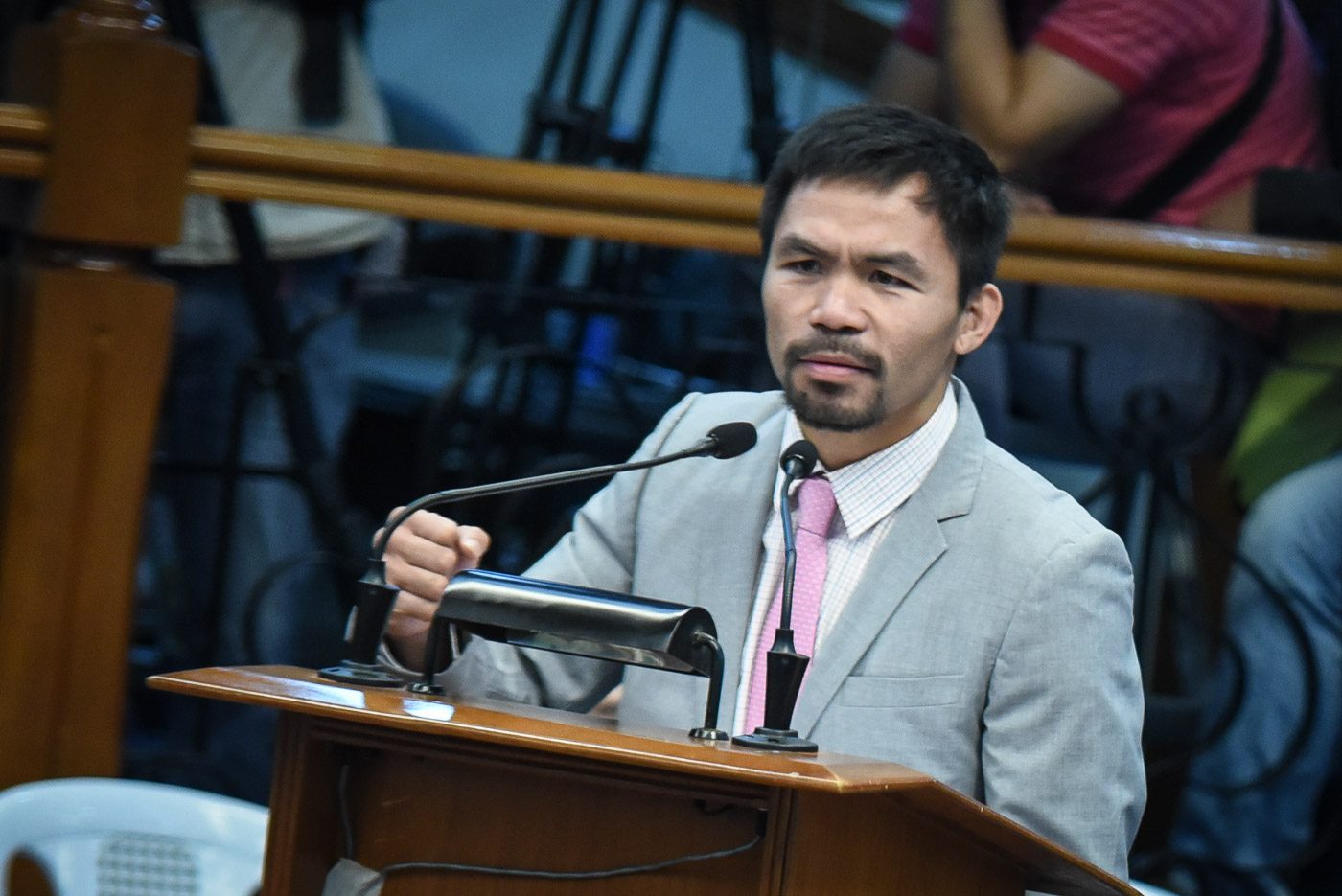 Trillanes, during his turn to ask questions, corrected certain parts of the Senate’s official transcript, pointing out that Matobato never claimed that they killed former House Speaker Prospero Nograles’ men, but former general Jovito Palparan’s men who supported Nograles. The Nograles clan used to be political foes of the Dutertes. The two clans, however, have since joined forces politically.

Pacquiao later chastised Matobato, pointing out that it’s hard to believe someone whose version of events constantly change.

“Paano mo kami mapapaniwala – ang Senado at ang buong sambayanan – kung pabago-bago ang sinasabi mo (How will we – the Senate and the entire country – believe you if the things you say constantly change)?” said Pacquiao.

Upon questioning by Pacquiao, Matobato insisted that he was telling the truth and that nobody coached him.

Matobato has accused Duterte and even the President’s son, current Davao City Vice Mayor Paolo Duterte, of ordering the DDS to kill suspects, criminals, and even personal foes.

Duterte and his son have belittled those claims. – Rappler.com